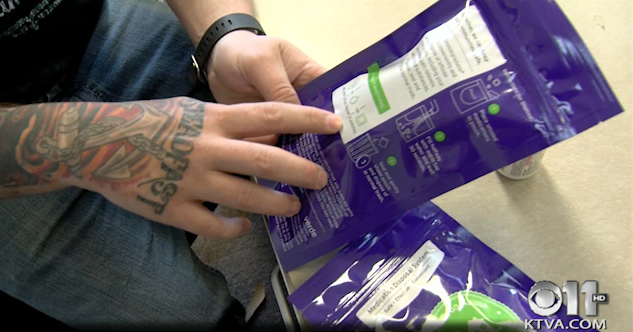 This may sound familiar, in fact, you’ve likely been there yourself. Your doctor prescribes you opioid pain medication, but once the pain is gone there are still pills left over.

The Department of Health and Social Services (DHSS) wants to keep your unused prescriptions from falling into the wrong hands while helping to fight the spread of opioid addiction.

On Wednesday the back of his truck was filled with hundreds of purple drug disposal bags. DHSS received a donation of 25 thousand of them just a few months ago.

Jones says the Mat-Su was among the first areas to start offering the bags free to residents.

“Reducing the medications that are in our cabinet, not getting them into the hands of individuals that may sell them or get them on the street, and by reducing that means we are hopefully not seeing people as addicted,” Jones said.

The waterproof, biodegradable bags contain active carbon. Simply adding water creates a chemical reaction that neutralizes drugs so they can no longer be absorbed by the body.

Valley based peer advocacy group “Fiend 2 Clean” recently surveyed about 150 8th graders at a Valley Middle School. Co-founder Karl Soderstrom says more than half of the students said they’d be able to get ahold of pain killers.

“These are 13 and 14 year old kids that feel like this could be a safe thing to experiment with or play with. It’s not,” Soderstrom said.

Four out of five heroin addicts started with an opioid prescription, according to Soderstrom.

“It’s the wild Wild West sometimes out here. We lack resources, we have a very unique state and a very unique problem. Opiates are on the rise here just like they are everywhere else,” said Soderstrom.

DHSS is working to get drug disposal bags in public health centers, social service agencies, and pharmacies across the state to help prevent drug abuse.

With more awareness and options, Jones says there are fewer excuses to do nothing.

“A lot of people say the epidemic doesn’t affect me completely but we all have a piece to play in this fight against the opioid epidemic,” said Jones.

DHSS also just received a federal grant, which will help the opioid response team purchase about 60,000 more drug disposal bags to pass out over the next two years.