91-year-old charged with killing his wife released to family 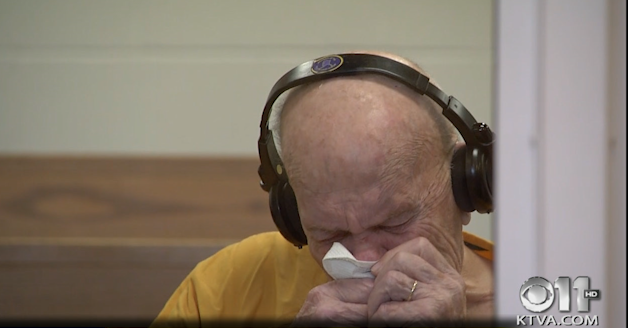 In a wheelchair, with headphones to aid his hearing and tears in his eyes, 91-year-old Duane Marvin appeared in Anchorage’s jail court on a murder charge Wednesday.

He cried throughout the hearing, at one point saying “I killed my wife.”

He gave a similar statement to detectives Sunday when they responded to his Midtown home and found the body of his wife, 92-year-old Charlotte Marvin.

The warrant for his arrest says investigators believe he shot his wife in the back of the head, hid the gun in a cabinet, then went to a neighbor’s home to report his wife had died.

“He is 91 and he has dementia,” his granddaughter told the judge Wednesday.

When asked if he is, in the words of his defense attorney, a “gun freak,” she responded, “Well he’s a U.S. Navy war veteran from WWII and decorated.”

She assured the judge all of Marvin’s firearms have been removed from this home.

The arraignment turned into an impromptu bail hearing and the judge released Marvin into her 24-hour custody.

Marvin’s defense attorney, Jon Buchholdt, says the shooting was an accident, and the gun went off because he fell.

“He stumbled in a bedroom with his wife, and he’s crippled, and he fired off a gun because he’s a gun freak,” said Buchholdt.

He also criticized the Anchorage Police Department’s investigation of the incident.

“That’s what happened,” said Buchholdt. “It should have been clear to the police, but they put him in jail simply because they could.”

“We made our decision based on the evidence” said Campion.

He said the evidence tells them it was not an accident, and emphasized that there’s no age limit when it comes to the law.

Nothing is final, Campion added. The case still has to go before the grand jury for indictment, and the court will have to determine whether Marvin is competent to stand trial.

The post 91-year-old charged with killing his wife released to family appeared first on KTVA 11.