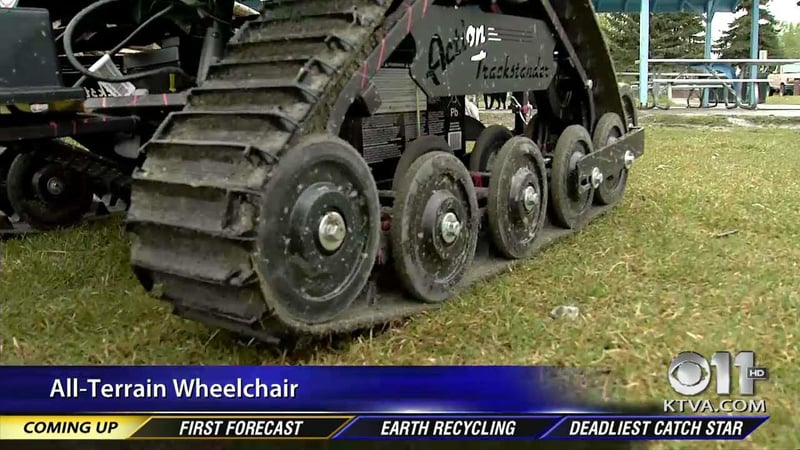 If you saw Kristie Lent out walking her dogs at University Lake or Connors Bog, you’d be excused if you did a double take. Lent is probably the only person using a specialized wheelchair to get the job done and she’s used to getting looks.

The ride that garners so much attention is called a track chair. Instead of two large wheels, it runs on a track, which means it can tackle all sorts of terrain. Lent got the track chair almost a year ago and said it has changed her life in many ways.

“Last weekend we went to Thunderbird Falls,” said Lent, referring to her husband. Daniel. “I hadn’t been able to do that. I’ve lived up here for 16 years and we’ve tried about two or three times to do it. Just to be able to see what other people can see and experience what other people can experience, it’s been incredible, a little emotional,” she said.

Lent said relatives had long urged her to look into a fancier ride but the high cost of doing so kept Lent from looking hard. She said insurance doesn’t cover the track chair and a price tag that came to $18,000 was out of the question. She decided to start a GoFundMe account and waited to see what would happen.

“It started off as a little bit of a bet just to see who would be willing to put their money where their mouth is and help raise money for it,” said Lent.

Lent said she was shocked when she got a thousand dollars the very first day. But it wasn’t just family members who donated. Many people in the Alaska mushing community did, too. Lent is a longtime volunteer with the Iditarod who has donated many hours to helping the race and the mushers who run it. She said friends came out of the woodwork to make sure she got her chair.

Lent said the chair is also helping her professionally, not just personally. She’s a professional photographer who was able to use the chair this winter to capture the Iditarod start in a way she never had before. She and her husband have set an even bigger goal for next year, to go out on the trail and take photos at some of the checkpoints. Lent said the track chair may just help her to realize that dream.