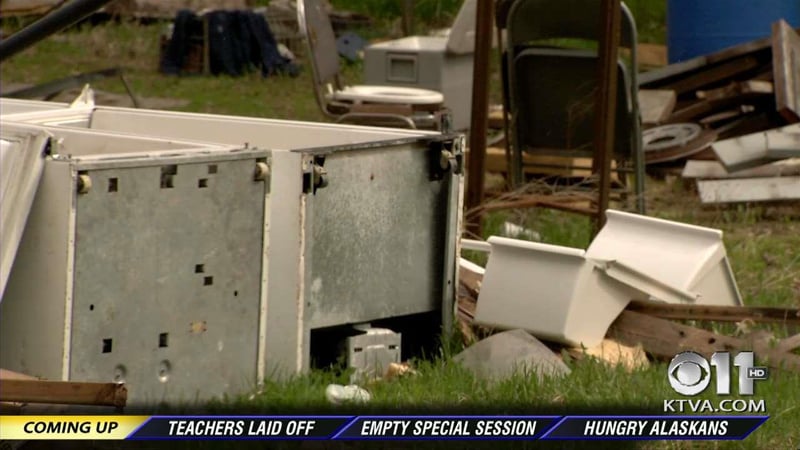 People who live near multiple trashed properties in South Anchorage say the municipality should be able to do something about the health hazards they’re living next to; but, after months — and in one case years — of reaching out for help, they’re still waiting on a solution.

At The Learning Farm on Gander Street off Huffman Road, there’s always work to be done, but owner Deborah Baines wouldn’t have it any other way.

“I love it,” she told KTVA Wednesday while bottle-feeding a calf.

What she doesn’t love is the eyesore next door or what it does to her business, which is a program for children.

“I’ve had people come out of the camper next door with a jar of pee and just pour it on the base of a tree,” she said.

She says she’s had several people walk onto her property, sometimes drunk, sometimes bloody from being beaten up. They’ll ask to use her phone, and one time wanted to use an extension cord between the properties to use her electricity.

The property is condemned: it has no water, electricity or sewer, and no one is supposed to be living there. When KTVA arrived, a man sitting outside on the property got up and left. He was later identified as a registered sex offender who should be living at an address in Big Lake, according to the state’s online sex offender registry.

“There should be some department that can address this. I just cannot see where, in the middle of Anchorage, they can just squat here, defecate in the woods… you know, it’s just appalling,” said Baines.

She says she’s been trying to get help from the municipality for at least four years. Anchorage’s nuisance laws allow them to cite and fine the owner, but even that has failed.

“Because he doesn’t have money,” Baines explained. “We’ve been told that.”

A little further south, on DeArmoun Road, neighbors face a similar problem, only the owner of that property is dead and there are no next of kin filing claims. The municipality has started a foreclosure process, but it could be October before they can take possession of the property and clean it up.

“This is disgusting,” Anchorage Assembly member Amy Demboski said at Tuesday’s regular meeting, after a neighbor passed out a packet of photos to assembly members.

In a letter to assembly members, Tim Peters wrote, “Legally, the municipality’s hands are tied, as there is no one to be held legally liable. Fair enough. Everyone is sympathetic, but they all say they are not able to do anything. I know that there are no easy solutions for the Muni here. However, as I watch my property taxes continue to increase at every election, I wonder what use you (not personally) are?”

Baines also brought her issue to the assembly. Both properties left members scratching their heads for a solution.

“We don’t have a mechanism to go onto private properties and do anything, nor the funds,” said Jack Frost, with Anchorage Code Enforcement.

South Anchorage Assembly member John Weddleton said he knows there are far more than just those two properties that have fallen through the cracks of muni code, but when they do find a solution, it will work for all of them.