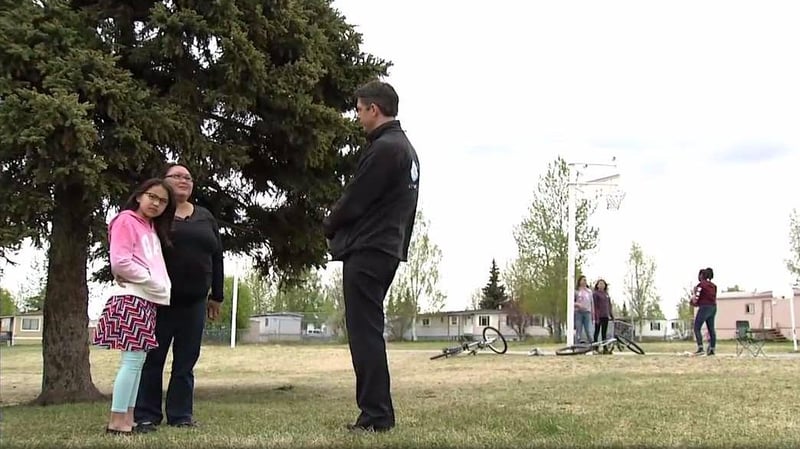 It’s certainly not something they learned in a classroom, but some elementary school students made all the right decisions when something awful happened at the Southwood Manor Mobile Home Park recently in South Anchorage.

Ten-year-old Emily Harris was climbing a tree when she slipped and fell. The hood of her hooded sweatshirt became snagged a branch.

Harris was unable to get free, the collar of the hoodie was wrapped around her neck and she was being strangled in midair.

However, other kids at the playground were right there when it happened. Spring Hill Elementary student Jodeci Rousseau said he tried to free Harris.

He and another Spring Hill student, Annalee Carty, tried holding up the young girl’s legs to release pressure on her neck. That wasn’t working, so Rousseau said he ran to his house across the playground and alerted his dad.

“He said, ‘Dad, there’s a little girl hanging outside by her neck. She really needs help. She looks like she’s going to die,'” Rick Roussea recalled.

He immediately ran to tree and was able to get Harris down. He said she wasn’t coherent and her lips had started to turn purple.

Two other Spring Hill students, Zachary Sisti and Gary Falemai, were also part of the rescue and helped call 911.

“When I first got here and I saw her laying there, pretty much lifeless. I thought that was it. I thought that I wasn’t going to see my daughter again,” Petey Pungalik, Harris’ mother, recalled.

According to Pungalik, her daughter made an amazing recovery and was out of the hospital in less than two days. She calls it a miracle.

Emily writes a note just before leaving the hospital.

The Anchorage Fire Department honored the Spring Hill students Wednesday at the school. Fire chief Denis LeBlanc was there, as were some of the first responders who arrived on scene that night. They directly credit the students for saving Harris’ life.

Pungalik said she can’t thank everyone enough for what they did to save her daughter. From the first responders, to staff at Alaska Native Medical Center, to Rick Rousseau and the Spring Hill students, specifically Jodeci Rousseau.

“For him (Jodeci) to try and help her, and when he couldn’t, run and get this dad. He’s just so incredibly brave,” said Pungalik.

A note to Emily from Jodeci Rousseau telling her to get better. (Photo provided by family)