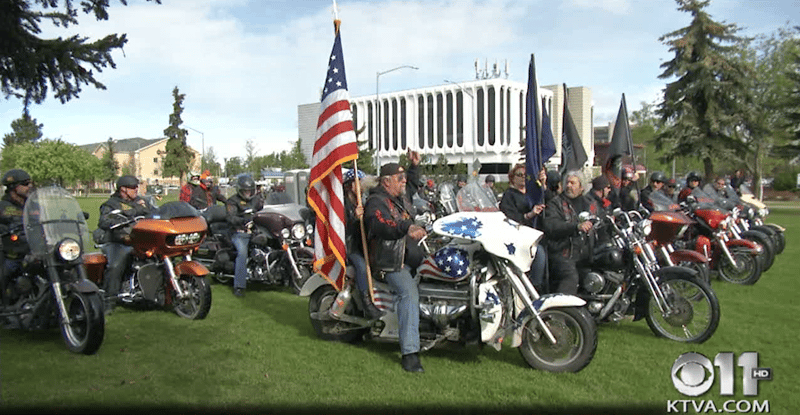 For members of the Alaska Vets Motorcycle Club, Memorial Day isn’t just a Monday off from work; it’s a weekend-long celebration to remember the fallen.

On Sunday, hundreds of bikers from around the state met at Mary’s McKinley View Lodge then road the Parks Highway to the Alaska Veterans Memorial. They’ve been doing the Byers Lake Memorial Run for almost 30 years.

“Everyone has their own personal reason why they go,” said chapter president Wayne Manning. “To go 150, 200 miles to a run isn’t just a good ride in the rain. They’re doing it because of heart.”

Manning and about two dozen riders were also in Anchorage for the Municipality’s Memorial Day service on Monday. They performed the rolling thunder as the Call to Colors, and presented the Fallen Warrior Memorial.

The club’s sergeant at arms, Army veteran Joseph Garner, knows what it means to lose a brother in combat; he served two tours of duty in Iraq.

He remembers the names of the fallen soldiers every day. Garner rolled up his sleeve to show dog tags tattooed on his arm in their memory.

“Cpl. Ryan Collins, SSg. Jacob McMillan, Sgt. Brennan Gibson, Ssg. Michael Hullender,” he listed off. “I had a personal connection with each one of them.”

While he and other veterans may not talk about their experiences, they want everyone to know the gone are not forgotten.

“The names get etched in your brain. It’s something you never want to forget but you don’t really want to share it either,” Garner said. “The burden of hurt is something a lot of people want to keep to yourself because you don’t want others to feel the deep rooted sorrow.”

He said the sights and sounds of Memorial Day remind him of the soldiers lost on the battlefield and the lives they sacrificed for our freedom.