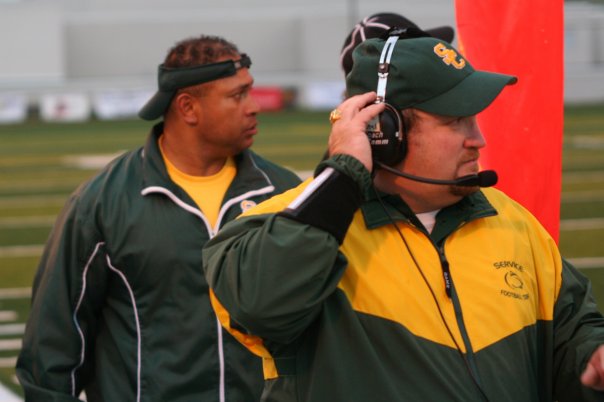 It could be said that the best coaches have the ability to shape their players both on and off the field, but most don’t have that same effect on members of a rival team.

Towards the end of his 14 years with the Service High football team, Kern caught the attention of a player from Anchorage’s East High School.

“I would go to a lot of Service games just to look at coach Kern’s coaching,” the player, who chose to remain anonymous for this story, said. “I would always see him holding his papers with his glasses on and running up and down the field. I told myself that’s who I wanted to be.”

A bond began to form across rival sidelines.

“I gave him a ride home one day. He was hanging around the school and I felt, ‘ok if these kids hang around the school too long they are going to get in trouble,” Kern said. “From that day on he always reached out and wished me luck when we had games.”

Although Kern retired two years ago, he and this particular player have stayed in touch via Facebook.

Kern describes the player as a humble and gentle giant who has experienced a lot for someone so young. His brother had been killed by police in 2012 and, while still in high school, he was caring for a one-year-old son and fiancé.

It had been a while since Kern had heard from the now 18-year-old, but last week the young man wrote him asking for guidance.

He told Kern that his parents and two little sisters had spent the last several months sleeping in their car. They were in desperate need of a place of their own and he was trying to help.

“My parents and sister would wake up in the morning to go work and school, after their jobs and school were finished, they would find a park or private spot to sleep at and sometimes if it was too packed, they would just run their gas. They would live off check after check. But my mom’s check wouldn’t be much cause it would go on car insurance, food, gas, & money to was their clothes. For a month now, all hopes seemed to be down,” the player wrote in his note to Kern.

He said his mother’s birthday was coming up and she only asked for two things: flowers for his brother’s grave and a house.

After six months on a waiting list with Cook Inlet Housing Authority, the player wrote that his father got a call that they had been accepted into a three bedroom family home, only they didn’t have enough money to pay the first month’s rent and deposit.

The player said he was reaching out to coach Kern for advice on what to do.

Kern’s response was not what this player expected.

“I strongly believe that as individuals we need to make a difference. So if someone else needs a helping hand, I believe in trying to be that person,” Kern said.

Kern put out the following call for help on his Facebook page:

It was posted on Friday afternoon. By the end of the holiday weekend, Kern says his friends and family on Facebook had generously donated the $2,000 dollars needed for the player and his family to move into their new home, as well as meals for the next six months.

“When Coach Kern posted all that stuff I was just amazed. I would check it every five minutes. I was unreal. It felt like a movie at first,” the player said. “My mom just couldn’t believe anything. She thought what I said was a lie. She asked, ‘How could a coach from Service High School do this for you?’ I was like, mom, he’s an angel.”

Kern paid the $2,000 directly to Cook Inlet Housing Authority on Tuesday and in perfect coach like fashion says the experience came with a lesson: You can either be a victim or a victor.

“I told this player to choose to be the victor every day, even during hard times like this,” Kern said. “He keeps asking, ‘How do I repay this?’ and I said, Just keep being a good kid, keep making positive choices, and understand that family and friends are number one.”

The player and his family hope to move into their new home this week, and while they would like to remain anonymous, they do want to say thank you to all of those who helped them overcome this obstacle.

“I love you coach, and I thank all your friends and families all over the place that has [sic] been generous and humble hearted to support my family, my girlfriend, my son, & I back to each other into a single home. I love all of you guys! God bless.”