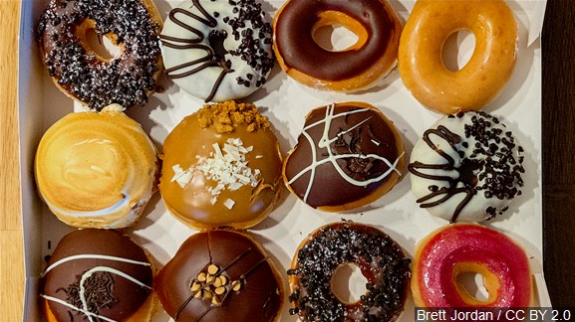 Like we needed an excuse to grab a donut on the way to work– but, Friday is National Donut Day.

Yes, there are freebies to be had, but we’ll get to that in a moment. National Donut Day began in Chicago in 1938 and is celebrated the first Friday in June annually. The day was established by The Salvation Army to honor their “Donut Lassies”, who handed out delicious treats to American soldiers on the front lines during World War I.

The Salvation Army Donut Lassies are often credited with the rise in donut popularity in the States after troops returned home from the war.

In celebration of National Donut Day, The Salvation Army is working with all of the major donut shops in Anchorage Friday, where you’ll find the iconic red donation kettle and canned food donation boxes.

Dino’s Donuts on East 81st Street is giving customers who donate canned food to The Salvation Army box a coupon for a free donut.

Krispy Kreme on Grass Creek Road will treat sweets lovers to a single donut of their choosing.

Downtown’s Kobuk Coffee, while they’re not giving away any free donuts, they did say they’re serving up their one-of-a-kind Alaska Birch Syrup donuts, and they expect Friday to be a big day.

We also reached out to Golden Donuts on East Tudor, who says they’re operating business as usual and expect National Donut Day to be a busy day.

Now, for the hard part: Who has the best donut in Anchorage? The Hungry Chum weighs in.