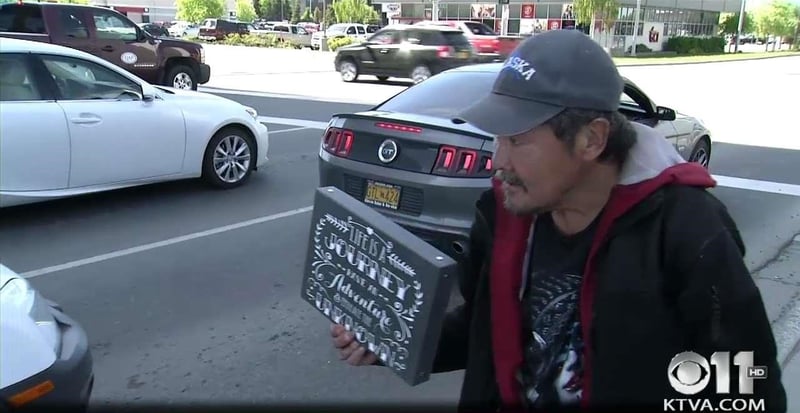 It’s a problem some say is getting worse — the number of panhandlers on Anchorage streets. At some times of day, it can seem like there’s someone with a sign at every corner, but, it’s difficult to know exactly how many panhandlers are regulars in Anchorage because, up till now, there’s never been a count.

On Thursday, a group with the campaign called, “Anchorage Cares,” hit the streets with a goal of counting panhandlers. Moira Sullivan, with the Anchorage Economic Development Corporation, a sponsor of Anchorage Cares, said the goal is to reduce panhandling by 75 percent over the next three years. That starts with a headcount, that will be compared to data collected next year at this time, she said. The group will be encouraging people not to give to panhandlers.

Tanya Vandenbos, a homeless outreach coordinator who works with the Anchorage Police Department agrees that giving to panhandlers — even if it’s food — can be enabling.

“There are a lot of agencies that already provide the kind of services you are trying to provide in a safe, legal way,” said Vandenbos. “I know it’s harder because it’s easier to open your window and give a handout, but as long as we as a community keep doing that, they are going to keep panhandling and not go to the services that are available.”

Under city law, it’s not illegal to panhandle as long as people stay out of the roadway.

But, drivers who give to panhandlers can be cited if the panhandler steps into the road to receive money. Police spokeswoman Renee Oistad said she couldn’t find anyone who’d been ticketed for the offense.