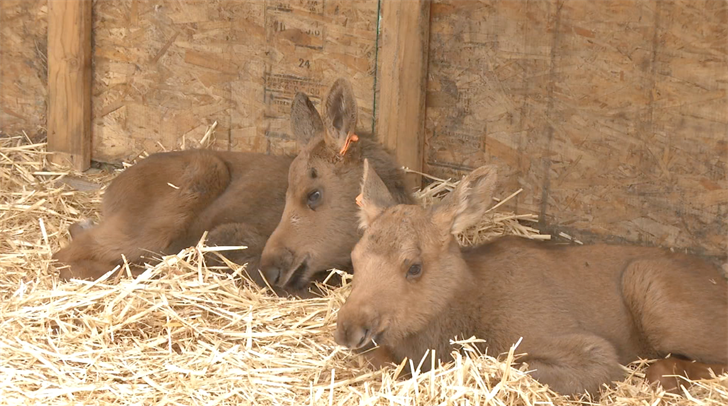 The organization Alaska Moose Mamas is now caring for its first orphaned moose calves of the season.

“Thelma” and “Louise” came to the facility last week, after biologists from the Department of Fish and Game euthanized their mom. Biologists said the cow attacked four people and had to put her down because she was “too aggressive.”

The babies are getting used to their new, temporary home on the hillside.

She founded Alaska Moose Mamas three years ago, with the goal of rehabilitating the orphans and releasing them back into the wild.

Debernardi and her interns basically camp for the summer. Their facility is a “lean-to,” with no running water or electricity.

“I call it ‘Frankenlumber,’” Debernardi described. “It’s wood that people have donated — scraps. I just put it up and make it work.”

At the peak of the season, they’ll get up to 15 calves. They just have the twins right now, but, caring for the pair is time consuming.

“Bottle feeding every few hours,” said intern Jessica Seay. “We go out on brows runs, where we get aspen, willow and different trees they like to eat.”

The newborns are cute, but, costly too. Each bucket of food runs about $160.

“This bucket with those two calves will probably last a week right now.” Debernardi explained. “When you have a lot of calves — we’re going through three of these a day.”

Like any new mom, they could use some help. That’s why Debernardi created a baby shower registry so people can pitch in. Items include:

“I don’t think people know what it takes to run something like this,” Debernardi said. “So, there’s propane fuel to put in our truck to go down the road to cut brows.” It also has to feed her interns as well, she added.

Debernardi estimates it takes a total of about $2,000 to care for each calf before they’re released. Money she said is worth it to get the babies back to the wild.

“I think they’re the most amazing animals I’ve ever seen,” Debernardi said.