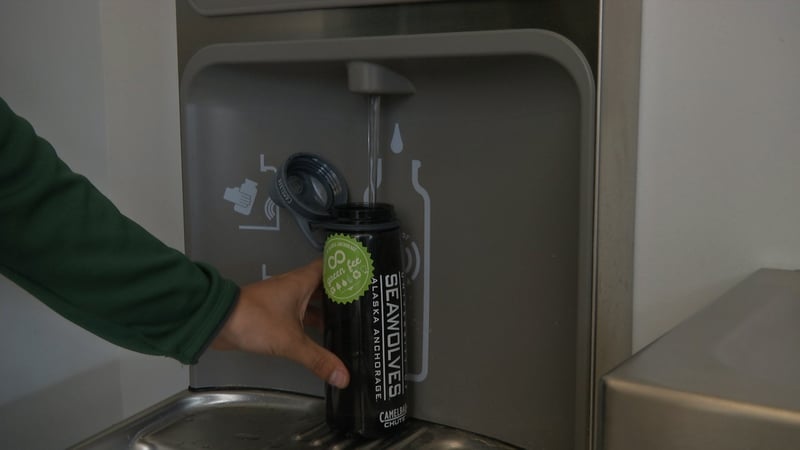 The University of Alaska Anchorage’s “hydration stations” have saved nearly 1,000,000 plastic water bottles from going in the garbage.

Science maintenance technician Stephanie Tranby saw a need for students between classes to have quicker access to water fountains.

“When I first started I was fixing a lot of the old fountains. I saw everyone tipping their little jars and I thought we need to get some hydration stations in here,” Tranby said.

Three years later the UAA campus has nearly 50 of them. Some of the fountains are paid for by the students themselves who requested money from their $3 Green Fee go to the cause.

“They gave two batches of money for about $50,000 and we were able to add 13 more units to the campus in high student density areas,” UAA facility manager Ryan Buchholdt explained.

The drinking fountains count the number of bottles that could have ended up in the trash Buchholdt said they ran some estimates and UAA’s one million bottles is “almost 56 dump truck loads of plastic.”

Marine debris is a problem in Alaska, and one-time use plastic plays a big role; only a fraction gets recycled and many find their way to the ocean.

“These plastics break into smaller and smaller pieces that look like food to these birds. A lot of these birds like plankton and the plastic looks just like plankton,” Veronica Padula explained.

Padula is a graduate student at UAA/UAF’s College of Fisheries and Ocean Sciences researching the plastic’s impact on birds in the Aleutians.

“It’s a really interesting thing to be looking at because these birds live on remote islands that are not near any human habitation and they’re ingesting plastics and getting exposed to the chemicals in the plastics,” Padula said.

Scientists said anything that can be done to prevent plastic debris is good for the whole ecosystem. UAA’s hydration stations are an easy way to be a part of the pollution solution.