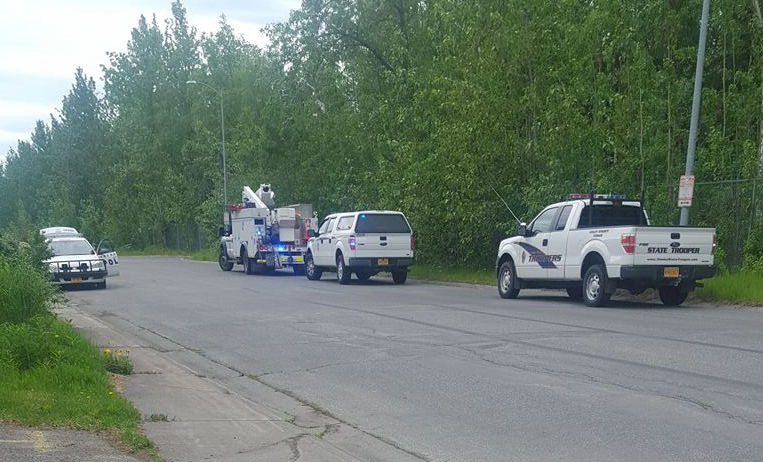 Crews called to attend to a power outage in Mountain View Thursday evening got a bit of a shock when they arrived on scene and saw the source of the problem. Turns out a black bear was responsible for the blackout.

Mark Johnston, general manager of Municipal Light and Power, said workers got a report of an outage a little after 5:30 Thursday evening. They traced it to a transformer on a utility pole in Mountain View off Thompson Avenue. When they arrived, they found a 150-pound black bear on the ground that was dead. Johnston said it’s believed the bear climbed the pole, touched the live transformer and was electrocuted.

Ken Marsh from Fish and Game said it’s unusual for a bear to mess with electrical wires. He could only remember one other incident where a brown bear was electrocuted several years ago in Kincaid Park after it chewed on an underground power line. But, Marsh said, climbing behavior is quite common– especially if a bear is stressed.

“Black bears, when they feel threatened, will seek refuge in trees, or, in this case, a pole,” said Marsh. “Maybe there was something that frightened the bear. Could have been traffic, could have been people, could have been the bear’s own mysterious reasons, but, for whatever reason, they sometimes climb trees and that may have been what got him into a pickle.”

Johnston said the outage was confined to about 20 customers. He said power was back on within about an hour.