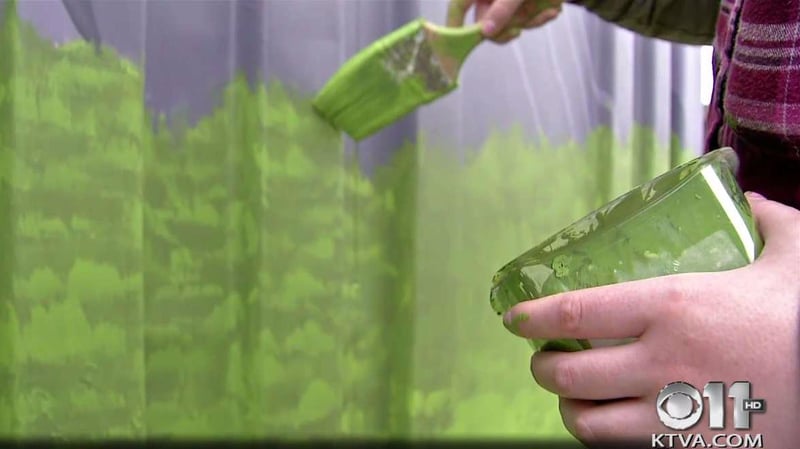 A colorful mural stands behind Mad Myrna’s bar in downtown Anchorage to honor the 49 victims of the Pulse Nightclub shooting one year ago.

The statewide LGBT group Identity, Inc. invited people of all ages and backgrounds to take part in “A Day of Remembrance.” Brooks Banker, the youth program manager at Identity, Inc. helped create the vision behind the mural – a view of Anchorage. He wanted it to symbolize hope at home in Alaska.

Banker lived in Orlando a year ago.

“I lived there for about a year and I celebrated by twenty-first birthday at Pulse, which is kind of a rite of passage for anyone,” he said. “Especially for the LGBT community, to be able to go to a place where for our community, is a place of togetherness.”

One of the artists, Kris Goodie, says taking part in crafting the mural held a special meaning.

“I really just want to show the community of Anchorage that we do have a LGBT community and I am really proud to be a part of it,” Goodie said. “Hopefully it’ll shine some light on the negativity our community faces as a whole.”

For Goodie, it’s also a reminder of his growth from about a year ago.

“I am a transgender male and I was just going through a really rough time of not feeling like I fit in and not understanding the feelings I was having,” he said. “It was really eye-opening to meet other people in the community who are going through the same thing I am.”

“I was just getting introduced into the (LGBT) community,” he said. “It was kind of scary for me because it was like oh my gosh, I am getting into this community and this is what happened.”

Monday evening, people at the event gave speeches about how their lives were affected by the tragedy and then walked over to Mad Myrna’s bar downtown, where the mural was. People dipped their hand in all colors of paint and read each name out of the 49 victims.

“It was a traumatic event and I think it’s going to be an event that stays with our collective memory because it was a targeted attack against us,” he said.

The people from Mad Myrna’s say they’ve received an outpouring of love and support from Anchorage residents after what happened at Pulse. They say it’s also taught them to strive for more inclusivity and to be more vigilant.

“We’ve upped our safety precautions on weekends specifically for crowds,” said Frank “MeMe” Jenkins, a bartender at Mad Myrna’s. “We’ve taken a stance that we want our clientele to feel safe – straight, gay or otherwise. We want you to feel safe when you come here.”