(CNN)Anti-ISIS coalition troops and allied Syrian opposition forces have repelled an attack by the terrorist group on a joint base in southern Syria, according to the coalition.

The US-led coalition said ISIS initiated a complex attack on Saturday at the At Tanf Garrison on the Syrian-Jordanian border using a vehicle-borne IED, and 20-30 fighters followed with a ground assault and suicide vests. 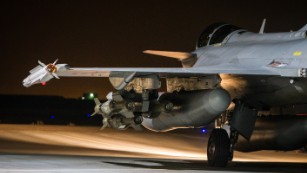 Which nations are attacking ISIS?
"Coalition and partnered forces engaged and defended the ISIS attack with direct fire before destroying enemy assault vehicles and the remaining fighters with multiple coalition airstrikes," the coalition said in a news release.
It is not known how long the battle lasted.
Initial reports indicate the assault did not result in any coalition casualties, a coalition official told CNN.
Some American forces were at the base at the time of the assault, the official said.
Russia bombed the At Tanf Garrison in June 2016, but there were no US forces there at the time. During that incident the coalition sent aircraft in an attempt to prevent airstrikes.
The Syrian opposition forces, known as VSO, who participated in Saturday's fight are separate from the Syrian Democratic Forces the coalition is working with in the northern part of the country.
"In Southern Syria, vetted Syrian opposition forces focus on conducting operations to clear ISIS from the Hamad Desert and have been instrumental in countering the ISIS threat in southern Syria and maintaining security along the Syria-Jordan border," said the coalition.
ISIS has seized large swaths of land in its quest to create a caliphate -- an Islamic state -- that stretches from western Syria to eastern Iraq.
Countries participating in the US-led coalition battling ISIS include the United Kingdom, France, Australia, Saudi Arabia, Turkey and Jordan, among others.