Police: Driver in custody after striking 2 plainclothes officers in Huntington 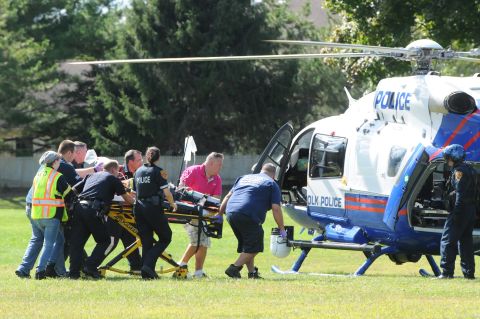 Police say two police officers were injured after being struck by a car in Huntington.

Authorities say Second Precinct Crime Section Officer Nicholas Guerrero and Officer Heriberto Lugo pulled a driver over during a routine traffic stop at around 1:30 p.m. on Partridge Lane in Huntington.

Police say the driver struck the two officers and fled the scene.

Officer Lugo suffered injuries that were not life-threatening. He has since been released.

Police say after the hit-and-run, the driver struck another car in Huntington and did not stop.

They say the driver then carjacked a woman in Commack and abandoned the SUV that hit the officers.

Investigators say they found the driver and two passengers inside a Target in Central Islip following a countywide manhunt. The alleged driver and one of the passengers were taken into custody.

Anyone with information about the incident is urged to call Crime Stoppers at 1-800-220-TIPS.