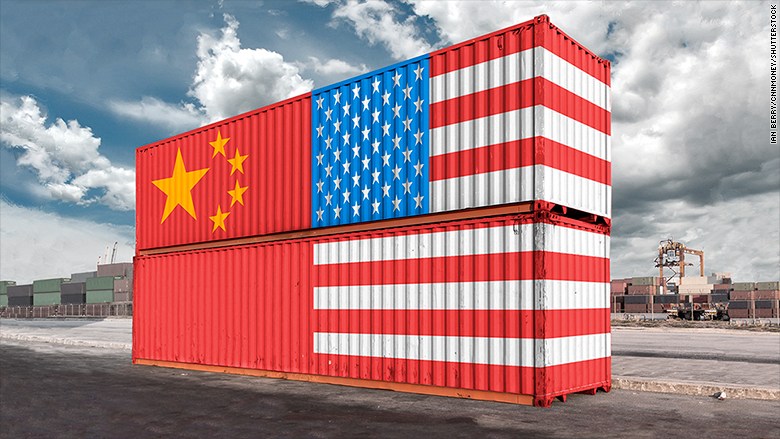 Donald Trump the campaigner talked tough on China: He threatened to slap tariffs of 45% on Chinese exports, and promised to label Beijing a "currency manipulator."

"We can't continue to allow China to rape our country, and that's what they're doing," he told supporters in May.

Threats to global trade will feature heavily in discussions among world leaders gathering for the APEC summit in Peru this week.

It's too early to say whether President-elect Trump will follow through on his campaign promises. But there's little doubt that doing so in full would spark a trade war.

Here are eight reasons why picking a fight with China is a bad idea -- for both countries:

"We have the power over China, economic power, and people don't understand it," Trump said during the campaign.

It's true that the U.S. wields significant power over Beijing. Huge amounts of trade flows in both directions across the Pacific, but China sells far more to the U.S. than it buys from American companies. Beijing has more to lose.

But don't for a second think that Chinese officials would not respond to aggressive action by a Trump administration with punitive measure of their own.

"If the U.S. imposes high tariffs on Chinese imports, then the smart move for China is to retaliate. China is too big to be bullied in this way," David Dollar, the U.S. Treasury Department's former financial emissary to Beijing, wrote recently on China File.

Several of America's corporate crown jewels would be vulnerable to retaliation by Beijing.

Starbucks (SBUX), Boeing (BA) and Apple (AAPL, Tech30), to name a few, have placed huge bets on China. All three companies say the country of 1.3 billion will soon be their single largest market, if it's not already.

But that momentum could all be easily erased. Here's what Global Times, a newspaper backed by the Communist Party, had to say about how Beijing would respond to tariffs of 45%:

"A batch of Boeing orders will be replaced by Airbus," the paper said Monday. "U.S. auto and iPhone sales in China will suffer a setback, and U.S. soybean and maize imports will be halted."

3) We've seen this movie before

In 2009, the Obama administration sought tariffs against China for dumping tires on the U.S. market.

The World Trade Organization sided with the U.S. But Beijing retaliated in classic tit-for-tat style with tariffs on American chicken.

The low-grade conflict simmered for years, eventually expanding to include solar panels, steel and other products.

American consumers are liable to pay a price at the register if Trump seeks new confrontations. One key reason: huge tariffs on Chinese goods will make them way too costly or drive them out of the U.S. market altogether.

"I don't think there's any way he can find a replacement [for Chinese products]," said Jianguang Shen, chief economist at Mizuho Securities Asia. "The replacement must be more expensive -- then inflation will be higher."

4) China is pouring money into the U.S.

China is the world's second largest economy, and its homegrown companies are becoming increasingly competitive on global markets. They're even making sizable investments in the U.S. as part of this progression.

U.S. firms have invested more than $225 billion in China since 1990, according to Rhodium Group. In return, China has invested roughly $65 billion -- and growing.

"Over the past five years foreign direct investment has evolved from a one-way street to a two-way highway, as tens of billions of dollars of Chinese investment are now directed at the United States each year," said the group's analysts.

Chinese investors are also buying up U.S. firms at an unprecedented rate.

Oh, and the China is the top holder of U.S. government bonds with $1.3 trillion on their books.

5) The jobs are not coming back

Trump has promised to bring back lost jobs to the U.S. -- especially in manufacturing.

In most cases, these claims don't reflect economic reality. Textile factories that once flourished in North Carolina mill country were lost decades ago to China. But costs are already too high there, and jobs are now shifting to countries like Bangladesh and Vietnam where labor is even less expensive.

"Those jobs are gone and they're not coming back," Edward Alden, a senior fellow at the Council on Foreign Relations, told CNNMoney last week. "Tariffs won't change that equation. Tariffs will make it worse."

Trump's ideas about China's currency are badly outdated. He has repeatedly accused Beijing of manipulating the yuan, arguing that China has boosted exports by keeping it artificially low.

But experts including the International Monetary Fund say the yuan is fairly valued. In fact, Beijing is actively supporting the currency to prevent it from falling.

"Labeling China a currency manipulator is fighting the last war, as China recently has been intervening to keep its currency high, not low," wrote former U.S. official Dollar.

8) China will seize the moment

If Trump's protectionist policies upend decades of global trade policy, Beijing will be ready to capitalize.

President Obama's signature Pacific trade deal, the TPP, is already dead in the water. Free trade negotiations between the U.S. and Europe are also on life support with little hope of being revived by President-elect Trump.

China, however, is now well positioned to draw its neighbors into a closer embrace. A trade war could help.

Related: What it NAFTA? And why does Trump hate it?

Will Trump follow through on his threats once firmly ensconced in the Oval Office? Early reports suggest he is already moderating his views.

President Xi Jinping and Trump spoke on the phone Sunday night, and "established a clear sense of mutual respect for one another," according to a short statement from Trump's transition team.

"President-elect Trump stated that he believes the two leaders will have one of the strongest relationships for both countries moving forward," it added.