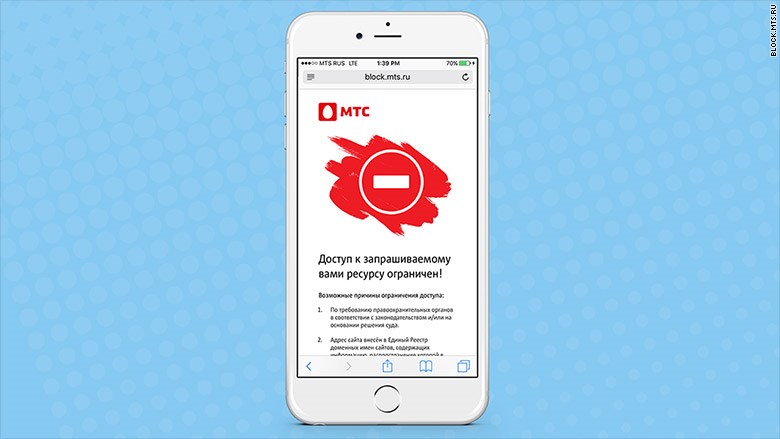 The country's communications regulator has blacklisted the social network for professionals because it has not complied with personal data storage regulations.

The site was inaccessible from Russia on Thursday.

LinkedIn (LNKD, Tech30) had been found to be in violation of a rule requiring data on Russian citizens to be stored on servers inside the country. Two different courts had previously ruled against LinkedIn on the matter.

LinkedIn, which is being acquired by Microsoft for $26 billion, said it was aware that users couldn't access the site. The company said it wanted to meet with communications regulator Roskomnadzor to discuss the data storage issue.

This is the screen that pops up when you try to access LinkedIn in Russia.

A spokesman for Russian President Vladimir Putin said shortly after the ban was announced that "Russian institutions are under the law and this company also has to observe the law."

He said the Kremlin would not get involved in the decision.

Moscow has increasingly been at loggerheads with Western tech companies. Google (GOOG)was found to be in violation of Russian antitrust rules in 2015 over the apps that come with its Android smartphones.

Meanwhile, the U.S. has accused Russia of hacking major U.S. political institutions during the 2016 election.

Last month, a 29-year-old Russian was arrested in Prague on suspicion of hacking LinkedIn, Dropbox and a third web service. He was wanted by the FBI in connection with the theft of 117 million LinkedIn passwords and login credentials.

LinkedIn has shown a willingness in the past to comply with foreign regulations.

In 2014, it agreed to censor content on its China network deemed sensitive by the government. Google, Facebook (FB, Tech30) and Twitter (TWTR, Tech30), which have not taken similar steps, remain blocked by Beijing.