This Valentine's Day weekend, movie audiences will experience Deadpool, starring Ryan Reynolds and Morena Baccarin as Wade Wilson and Vanessa Carlysle, respectively. It's a timeless story about a hitman who is diagnosed with terminal cancer; volunteers for an experiment intended to grant him healing abilities and super powers, and winds up a disfigured, virtually unkillable mercenary who won't stop snarking; has a deep, unapologetic love of the late Bea Arthur; has an alarming craving for chimichangas; and seems to think that he's a character in a comic book.

Nicieza and Liefeld's first issue together was New Mutants #98 (published in late 1990, with a cover date of February 1991). It introduced a snide, sword-wielding assassin hired by the mysterious Mr. Tolliver to kill Cable. WadE WILSON, AKA DEADPOOL, had enhanced physical skills and a regenerative ability that made him virtually immortal, helping him to shrug off otherwise lethal injuries. His creation was also inspired by DC Comics assassin Slade Wilson, aka Deathstroke the Terminator, but that's a whole conversation by itself. 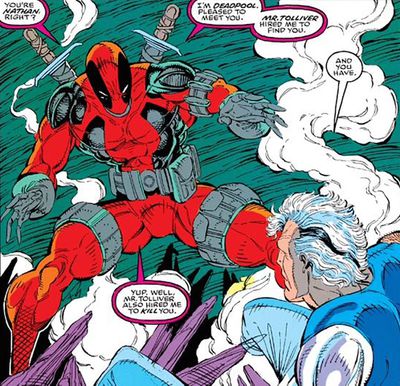