FRANKLYWNOW - DID HOMER SIMPSON DISCOVER THE HIGGS BOSON 14 YEARS AGO?

Posted On: LastEdited
Share.
How very Nobel of him.

BY LUKE KARMALIHomer Simpson may, in fact, be a scientific genius, as it's been revealed he predicted the mass of the elementary Higgs boson particle more than a decade before scientists.

As The Independent reports, a new book called The Simpsons and their Mathematical Secrets by Dr. Simon Singh reveals Homer came startlingly close to figuring out the truth back in an episode from 1998.

In "The Wizard of Evergreen Terrace", Homer becomes an inventor. Though the creations he remains most famous for devising include the electric hammer and the make-up gun (still not sure why that didn't catch on), a scene in which he's depicted in front of a blackboard bearing an equation actually works out the mass of the previously-unknown particle. 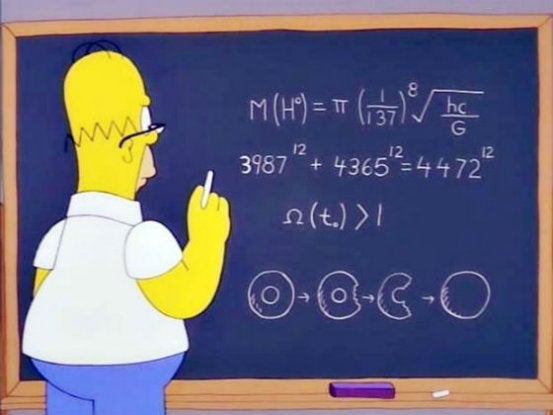 A lot of the writers on The Simpsons are mathematicians.

"The Simpsons is the most mathematical TV show on prime-time television in history. A lot of the writers on The Simpsons are mathematicians."

Indeed, the Daily Mail reports script writer David X. Cohen contact an old high school friend, David Schiminovich, who is an astronomer at Columbia University, and the first equation on the board is largely based on his work for predicting the mass of the Higgs boson, depicted by H0.

"The equation is a playful combination of various fundamental parameters, namely the Planck constant, the gravitational constant, and the speed of light," Singh says. 'If you look up these numbers and plug them into the equation, it predicts a mass of 775 giga-electron-volts (GeV), which is not unreasonably higher than the 125 GeV estimate that emerged when the Higgs boson was discovered in 2012."

The existence of the Higgs boson - or God Particle - was theorised by Professor Peter Higgs back in 1964 and explains why the building blocks of the universe have mass. Proof wasn't found until 2013, when the Large Hadron Collider detected a particle fitting the bill, and it only cost $13.25 billion to figure it all out. The physicists at Cern, along with Higgs, received a Nobel Prize.

If I was Homer, I'd be pretty cheesed off.