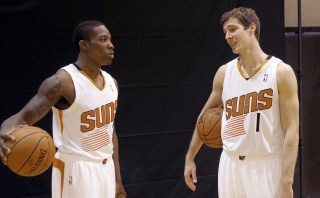 Last season: The Suns were one of the league's pleasant surprises, racking up 48 wins and just barely missing the playoffs during a season where expectations were essentially the exact opposite. No one expected a starting lineup that featured Channing Frye, P.J. Tucker and Miles Plumlee to be capable of that much, but the team played cohesively under first-year head coach Jeff Hornacek, and with Goran Dragic playing at a level that earned him third-team All-NBA honors, along with a resurgent Gerald Green, the competent Morris twins, and half a season of Eric Bledsoe (did I get everybody?), Phoenix became a League Pass favorite early in the season.

Signature highlight from last season: The primary reason for the unexpected success the Suns experienced was their ability to play as a unit, while getting important contributions from multiple players on a nightly basis. This particular clip showcases that — Plumlee gets things started with a rejection at the rim, Frye saves the ball from going out of bounds to Bledsoe, who goes the length of the floor and absorbs the contact for the impressive and-1 finish.