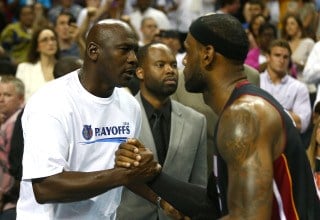 LeBron James is no Michael Jordan.

If you're among the Jordan loyalists looking for any chance to tear down LeBron or any other current star, Jordan is giving you ammunition on a silver platter – while making a legitimately good case.

After the NBA announced it would experiment with a 44-minute game, LeBron (and Dirk Nowitzki) said fewer games were a preferable solution.

Jordan, via Chris Broussard of ESPN:

“I love both of those guys but as an owner who played the game, I loved playing,” Jordan told ESPN.com during a telephone interview. “If I wasn't playing 82 games, I still would've been playing somewhere else because that's the love for the game I had. As a player, I never thought 82 games was an issue.

“But if that's what they want to do, we as owners and players can evaluate it and talk about it. But we'd make less money as partners. Are they ready to give up money to play fewer games? That's the question because you can't make the same amount of money playing fewer games.”

“I would never shorten the game by four minutes,” said Jordan, who owns the Charlotte Hornets, “unless guys were having physical issues.”

Jordan played on teams that hit 67, 69 and 72 wins. LeBron's teams have never hit those marks.

I don't think this is an issue Jordan understands as a player, because nobody has ever played the game like him. His unwavering competitiveness in games is unmatched. For everyone else, the season drags at times, and that affects the product on the floor.

As an owner, though? Jordan gets it. Fewer games almost certainly means less money. Maybe the sacrifice would be worth making, but the likely downside must be acknowledged to begin any discussion.