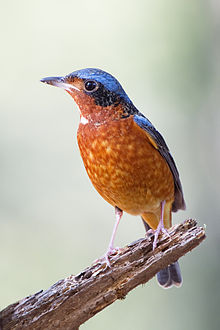 The first classification of birds was developed by Francis Willughby and John Ray in their 1676 volume Ornithologiae.[2] Carolus Linnaeus modified that work in 1758 to devise the taxonomic classification system currently in use.[3] Birds are categorised as the biological class Aves in Linnaean taxonomy. Phylogenetic taxonomy places Aves in the dinosaur clade Theropoda.[4] Aves and a sister group, the clade Crocodilia, contain the only living representatives of the reptile clade Archosauria. During the late 1990s, Aves was most commonly defined phylogenetically as all descendants of the most recent common ancestor of modern birds and Archaeopteryx lithographica.[5] However, an earlier definition proposed by Jacques Gauthier gained wide currency in the 21st century, and is used by many scientists including adherents of the Phylocode system. Gauthier defined Aves to include only the modern bird groups, the crown group. This was done by excluding most groups known only from fossils, and assigning them, instead, to the Avialae,[6] in part to avoid the uncertainties about the placement of Archaeopteryx in relation to animals traditionally thought of as theropod dinosaurs.

Based on fossil and biological evidence, most scientists accept that birds are a specialized subgroup of theropod dinosaurs.[10] More specifically, they are members of Maniraptora, a group of theropods which includes dromaeosaurs and oviraptorids, among others.[11] As scientists have discovered more nonavian theropods closely related to birds, the previously clear distinction between nonbirds and birds has become blurred. Recent discoveries in the Liaoning Province of northeast China, which demonstrate many small theropod dinosaurs had feathers, contribute to this ambiguity.[12]

The consensus view in contemporary paleontology is that the birds, or avialans, are the closest relatives of the deinonychosaurs, which include dromaeosaurids, troodontids and possibly archaeopterygids.[13] Together, these three form a group called Paraves. Some basal members of this group, such as Microraptor and Archaeopteryx, have features which may have enabled them to glide or fly. The most basal deinonychosaurs are very small. This evidence raises the possibility that the ancestor of all paravians may have been arboreal, may have been able to glide, or both.[14][15] Unlike Archaeopteryx and the feathered dinosaurs, who primarily ate meat, recent studies suggest that the first birds were herbivores.[16]

The Late Jurassic Archaeopteryx is well known as one of the first transitional fossils to be found, and it provided support for the theory of evolution in the late 19th century. Archaeopteryx was the first fossil to display both clearly reptilian characteristics: teeth, clawed fingers, and a long, lizard-like tail, as well as wings with flight feathers identical to those of modern birds. It is not considered a direct ancestor of modern birds, though it is possibly closely related to the real ancestor.[17]

Early disagreements on the origins of birds included whether birds evolved from dinosaurs or more primitive archosaurs. Within the dinosaur camp, there were disagreements as to whether ornithischian or theropod dinosaurs were the more likely ancestors.[18] Although ornithischian (bird-hipped) dinosaurs share the hip structure of modern birds, birds are thought to have originated from the saurischian (lizard-hipped) dinosaurs, and therefore evolved their hip structure independently.[19] In fact, a bird-like hip structure evolved a third time among a peculiar group of theropods known as the Therizinosauridae.

A small minority of researchers, such as paleornithologist Alan Feduccia of the University of North Carolina, challenge the majority view, contending that birds are not dinosaurs, but evolved from early archosaurs like Longisquama.