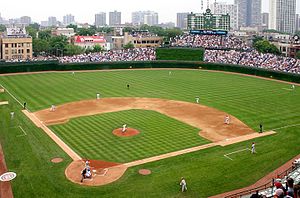 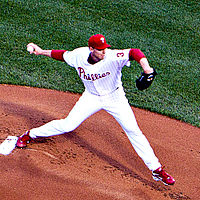 Even though, today, my view on baseball has changed. I don't think its boring, well to sit at home and watch it, is boring. Being live at the stadium and in the audience is a lot of fun. I realized this at my first baseball game. I went to watch the Baltimore Orioles and whatever team they were playing. I had a ball. Who knew? I guess I'm American afterall. LOL

Baseball is a bat-and-ball sport played between two teams of nine players. The aim is to score runs by hitting a thrown ball with a bat and touching a series of four bases arranged at the corners of a 90-foot diamond. Players on the batting team take turns hitting against the pitcher of the fielding team, which tries to stop them from scoring runs by getting hitters out in any of several ways. A player on the batting team can stop at any of the bases and later advance via a teammate's hit or other means. The teams switch between batting and fielding whenever the fielding team records three outs. One turn at bat for each team constitutes an inning and nine innings make up a professional game. The team with the most runs at the end of the game wins.

Evolving from older bat-and-ball games, an early form of baseball was being played in England by the mid-eighteenth century. This game was brought by immigrants to North America, where the modern version developed. By the late nineteenth century, baseball was widely recognized as the national sport of the United States. Baseball is now popular in North America, parts of Central and South America and the Caribbean, and parts of East Asia.

In the United States and Canada, professional Major League Baseball (MLB) teams are divided into the National League (NL) and American League (AL), each with three divisions: East, West, and Central. The major league champion is determined by playoffs that culminate in the World Series. Five teams make the playoffs from each league: the three regular season division winners, plus two wild card teams. Baseball is the leading team sport in both Japan and Cuba, and the top level of play is similarly split between two leagues: Japan's Central League and Pacific League; Cuba's West League and East League. In the National and Central leagues, the pitcher is required to bat, per the traditional rules. In the American, Pacific, and both Cuban leagues, there is a tenth player, a designated hitter, who bats for the pitcher. Each top-level team has a farm system of one or more minor league teams.