McDonald's to include calorie counts on menu boards, but will that deter diners? 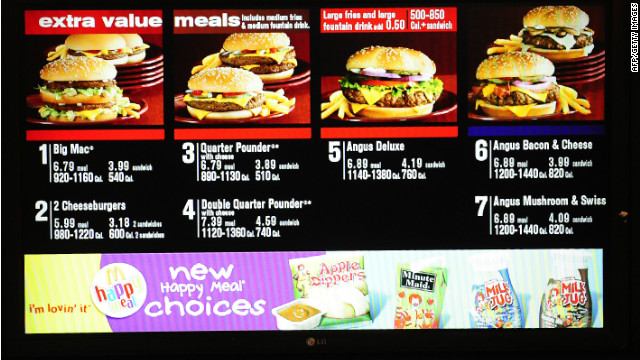 McDonald's president Jan Fields announced today that starting next week, menu boards in the chain's restaurants and drive-thrus will contain calorie counts for all menu items in accordance with the company's ongoing Commitments to Offer Improved Nutrition Choices program.

The announcement came as part of the presentation of McDonald's 2012 Nutrition Journey Progress Report, which highlight's the company's stated goals, including an active interest in children's well-being, more and better nutritionally-balanced menu choices and increased customer and employee access to nutrition information and education.

While McDonald's will not be the first major restaurant chain to prominently post calorie counts within its restaurants - Panera Bread took that measure in April, 2010 - it will be the largest, serving 25 million customers daily. The move comes in advance of a proposed federal regulation that would require chains to share this information, possibly as early as next year. McDonald's has long provided nutritional breakdowns of its standard menu items on its website.

The chain's press release emphasized its "Favorites Under 400" menu, which highlights individual menu items, such as Snack Wraps, cheeseburgers, medium fries and diet drinks that come in under 400 calories, but as critics are noting, items can quickly add up. A McDonald's standard sized Extra Value Meal with a Big Mac, medium fries and a medium Coke adds up to 1140 calories, 48 grams of fat, 1280 milligrams of sodium and 67 grams of sugar, according to the website's Meal Builder tool.

In addition to the posted calorie counts, McDonald's also plans to expand its healthier offerings, including more seasonal fruit and vegetables options, produce and grilled chicken choices for Happy Meals and new breakfast choices, including an egg-white breakfast sandwich on an English muffin.