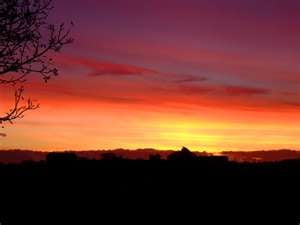 Cake is a form of bread or bread-like food. In its modern forms, it is typically a sweet baked dessert. In its oldest forms, cakes were normally fried breads or cheesecakes, and normally had a disk shape. Determining whether a given food should be classified as bread, cake, or pastry can be difficult.

Modern cake, especially layer cakes, normally contain a combination of flour, sugar, eggs, and butter or oil, with some varieties also requiring liquid (typically milk or water) and leavening agents (such as yeast or baking powder). Flavorful ingredients like fruitpurées, nuts, dried or candied fruit, or extracts are often added, and numerous substitutions for the primary ingredients are possible. Cakes are often filled with fruit preserves or dessert sauces (like pastry cream), iced with buttercream or other icings, and decorated with marzipan, piped borders or candied fruit.[1]

Cake is often the dessert of choice for meals at ceremonial occasions, particularly weddings, anniversaries, and birthdays. There are countless cake recipes; some are bread-like, some rich and elaborate, and many are centuries old. Cake making is no longer a complicated procedure; while at one time considerable labor went into cake making (particularly the whisking of egg foams), baking equipment and directions have been simplified so that even the most amateur cook may bake a cake. Cakes are broadly divided into several categories, based primarily on ingredients and cooking techniques. Beyond these classifications, cakes can be classified based on their appropriate accompaniment (such as coffee cake) and contents (e.g. fruitcake or flourless chocolate cake).

Some varieties of cake are widely available in the form of cake mixes, wherein some of the ingredients (usually flour, sugar, flavoring, baking powder, and sometimes some form of fat) are premixed, and the cook needs add only a few extra ingredients, usually eggs, water, and sometimes vegetable oil or butter. While the diversity of represented styles is limited, cake mixes do provide an easy and readily available homemade option for cooks who are not accomplished bakers.

Cakes may be classified according to the occasion for which they are intended. For example, wedding cakes, birthday cakes, cakes for first communion, Christmas cakes,Halloween cakes and Passover plava (a type of sponge cake sometimes made with matzo meal) are all identified primarily according to the celebration they are intended to accompany. The cutting of a wedding cake constitutes a social ceremony in some cultures. The Ancient Roman marriage ritual of confarreatio originated in the sharing of a cake.

Cakes are frequently described according to their physical form. Cakes may be small and intended for individual consumption. Larger cakes may be made with the intention of being sliced and served as part of a meal or social function. Common shapes include:

Special cake flour with a high starch-to-gluten ratio is made from fine-textured, soft, low-protein wheat. It is strongly bleached, and compared to all-purpose flour, cake flour tends to result in cakes with a lighter, less dense texture.[2] Therefore, it is frequently specified or preferred in cakes meant to be soft, light, and or bright white, such as angel food cake. However, if cake flour is called for, a substitute can be made by replacing a small percentage of all-purpose flour with cornstarch or removing two tablespoons from each cup of all-purpose flour.[3][4][5] Some recipes explicitly specify or permit all-purpose flour, notably where a firmer or denser cake texture is desired. A finished cake is often enhanced by covering it with icing, or frosting, and toppings such as sprinkles, which are also known as "jimmies" in certain parts of the United States and "hundreds and thousands" in the United Kingdom. Frosting is usually made from powdered (icing) sugar, sometimes a fat of some sort, milk or cream, and often flavorings such as vanilla extract or cocoa powder. Some decorators use a rolled fondant icing. Commercial bakeries tend to use lard for the fat, and often whip the lard to introduce air bubbles. This makes the icing light and spreadable. Home bakers either use lard, butter, margarine or some combination thereof. Sprinkles are small firm pieces of sugar and oils that are colored with food coloring. In the late 20th century, new cake decorating products became available to the public. These include several specialized sprinkles and even methods to print pictures and transfer the image onto a cake.

Royal icing, marzipan (or a less sweet version, known as almond paste), fondant icing (also known as sugarpaste) and buttercream are used as covering icings and to create decorations. Floral sugarcraft or wired sugar flowers are an important part of cake decoration. Cakes for special occasions, such as wedding cakes, are traditionally rich fruit cakes or occasionally Madeira cakes, that are covered with marzipan and iced using royal icing or sugar-paste. They are finished with piped borders (made with royal icing) and adorned with a piped message, wired sugar flowers, hand-formed fondant flowers, marzipan fruit, piped flowers, or crystallized fruits or flowers such asgrapes or violets.