FRANKLYWNOW - A Thunderous Applause for Thor

A Thunderous Applause for Thor 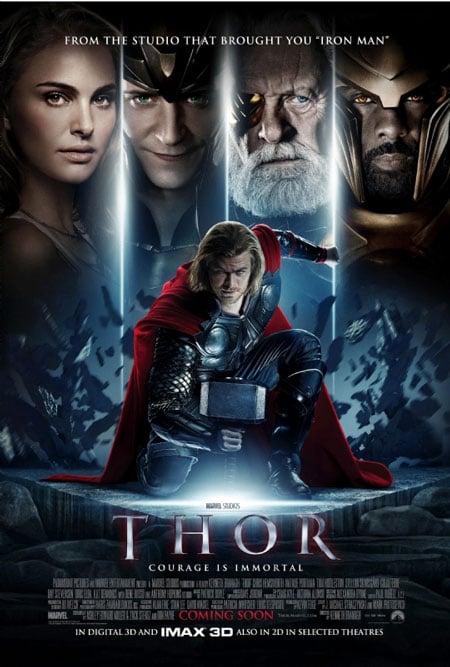 I have to admit that superhero movies are getting really stale, really fast - especially from Marvel. Ever since their big hit with the motion picture Spider-man released in the early 2000's the movie industry has been trying to rake in all the rage of superheroes. What were once looked upon as cheesy characters for only children to admire has become a serious adult drama combined with an actual flick. Some have risen to the top, while others - like a certain green giant - have suck to the bottom.

That is why I had my major reservations when I heard about the Thor movie coming out. Not only is he one of the lesser known superheroes, but the trailers for this upcoming movie seemed to scream out cheesiness. I always sat with unease watching the trailer for Thor and often chose to turn away. So I was thankful when push came to shove and I had to go to the movie that I had to watch just based on time constraints, that I was essentially forced to watch Thor.

Straight off the bat, I have to tell you that I don't know Marvel's Thor, nor do I know the original or widely accepted version of Thor that comic book fans have come to love. Approaching this with fresh eyes, I was pleasantly surprised at what I saw. It had all the elements of what makes a great superhero movie.

First, and most importantly, the storyline. Thor comes from a galaxy in another universe in which a group of evil aliens seek to conquer and destroy every other planet in existence. The antagonists of the film have come to destroy almost every planet except the one in which Thor inhabits due to the King's - his father's great diplomacy. Thor's hotheadedness, arrogance, and lack of understanding of true responsibility ultimately lead to his downfall and almost took his whole people with it. It is from this that he has his powers revoked and was sent to Earth as his punishment. However, his brother begins to usurp the throne from the King and thus chaos ensues as Earth becomes ensnared in a battle for survival that only Thor and his friends can help.

The story does go deeper than that, but not too deep to get a general audience lost. Thor manages to take itself seriously and make fun of itself at times which is oddly refreshing.

The character line up as well as the acting was well executed with none of the lines sounding cheesy, and the special effects in the movie as well as the costume and set design were amazing.

Everyone knows that the reason for Marvel pumping out these superhero movies is because of the fact that they plan to unite them into a single movie for The Avengers - which consist of most of the heroes that they have made movies for. Though some have come to disappoint, Marvel has learned its lesson with Thor and it will be interesting to see if this trend continues with the upcoming film Captain America.