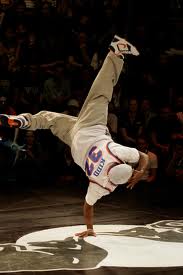 B-boying, often called "breakdancing", is a popular style of street dance that was created and developed as part of hip-hop culture among African Americans and, later, among Latino youths in New York City.[1]:125, 141, 153 The dance consists of four primary elements: toprock, downrock, power moves and freezes/suicides. It is danced to both hip-hop and other genres of music that are often remixed to prolong the musical breaks. The musical selection for b-boying is not restricted to hip-hop music as long as the tempo and beat pattern conditions are met. A practitioner of this dance is called a b-boy, b-girl, or breaker. These dancers often participate in battles, formal or informal dance competitions between two individuals or two crews. Although the term "breakdance" is frequently used, "b-boying" and "breaking" are the original terms used to refer to the dance. These terms are preferred by the majority of the art form's pioneers and most notable practitioners.