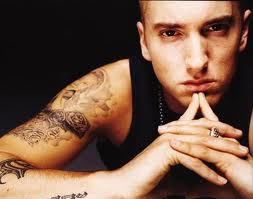 The Marshall Mathers LP and his third album, The Eminem Show, also won Grammy Awards, making Eminem the first artist to win Best Rap Album for three consecutive LPs. He then won the award again in 2010 for his album Relapse and in 2011 for his album Recovery, giving him a total of 13 Grammys in his career. In 2003, he won the Academy Award for Best Original Song for "Lose Yourself" from the film, 8 Mile, in which he also played the lead. "Lose Yourself" would go on to become the longest running No. 1 hip hop single. Eminem then went on hiatus after touring in 2005. He released his first album since 2004's Encore, titled Relapse, on May 15, 2009. Eminem is the best-selling artist of the decade on the US Nielsen SoundScan, and has sold more than 80 million albums worldwide to date, making him one of the best-selling music artists in the world. In 2010, Eminem released his seventh studio album Recovery. It became Eminem's sixth consecutive number-one album in the US and achieved international commercial success, charting at number one in several other countries. It stayed at number-one on the US Billboard 200 chart for five consecutive weeks and a total of seven weeks.[6][7] Recovery was also reported by Billboard to be the best-selling album of 2010, making Eminem the first artist in Nielsen SoundScan history to have two year-end best-selling albums. Recovery is also the best selling digital album in history.

In 2005, Eminem was ranked 79th on the VH1 100 Greatest Artists of All-Time. He was also ranked 82nd on Rolling Stone magazine's list of the 100 Greatest Artists of All Time. He was also named the Best Rapper Alive by Vibe magazine in 2008. Including his work with D12, Eminem has achieved nine No. 1 albums on the Billboard Top 200, 7 solo (6 studio albums, 1 compilation) and 2 with D12. Eminem has had 13 number one singles worldwide. In December 2009, Eminem was named the Artist of the Decade by Billboard magazine. His albums The Eminem Show, The Marshall Mathers LP, and Encore (in order) ranked as the 3rd, 7th, and 40th best-selling albums of the 2000–2009 decade by Billboard magazine. Also according to Billboard, Eminem has two of his albums among the top five highest selling albums of the 2000s. In the UK, Eminem has sold over 12.5 million records. Eminem has also sold more than 33 million track downloads and 39.6 million albums in the United States alone. In 2010, MTV ranked Eminem as the 7th biggest icon in pop music history. During 2010, Eminem's music generated 94 million streams, more than any other music artist. "Love the Way You Lie", the second single from 2010's Recovery was the best-selling single of 2010 in the United Kingdom even though it did not reach number 1 there, the first time this has happened in the UK since 1969.  Eminem has scored over 1 billion views on his official Vevo page on Youtube. Eminem is the most popular person ever on Facebook with over 30 million likes.