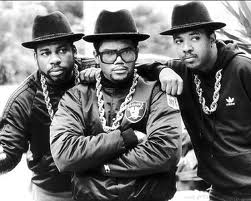 The new school of hip hop was the second wave of hip hop music, originating in 1983–84 with the early records of Run-D.M.C. and LL Cool J. As with the hip hop preceding it, the new school came predominately from New York City. The new school was initially characterized in form by drum machine-led minimalism, with influences from rock music. It was notable for taunts and boasts about rapping, and socio-political commentary, both delivered in an aggressive, self-assertive style. In image as in song its artists projected a tough, cool, street b-boy attitude. These elements contrasted sharply with the funk and disco influenced outfits, novelty hits, live bands, synthesizers and party rhymes of artists prevalent prior to 1984, and rendered them old-school. New school artists made shorter songs that could more easily gain radio play, and more cohesive LPs than their old school counterparts. By 1986 their releases began to establish the hip hop album as a fixture of the mainstream. Hip hop music became commercially successful, as exemplified by the Beastie Boys' 1986 album Licensed to Ill, which was the first rap album to hit #1 on the Billboard charts.[