FRANKLYWNOW - 'Big Love': Were the final 15 minutes a blessing or a sin?

'Big Love': Were the final 15 minutes a blessing or a sin? 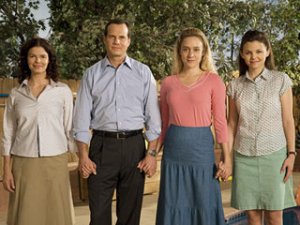 With last night's shocking series finale, Big Love left some of its fans praising the heavens and others cursing the writers for ending the Henricksons' saga on a note of tragedy. If you haven't seen the finale yet, stop reading now. Otherwise, join me after the jump for the debate…

As I said yesterday, the one thing I really wanted out of the Big Love finale was for Barb, Nicki, and Margene to break free of Bill and discover who they are without him. I thought it would happen with Bill going to jail for statutory rape, but instead it came with the poor guy being shot to death by his neighbor Carl, a desperate and broken man who blamed Bill for everything that had gone wrong in his life. But rather than falling apart, the family — as we learned from the brief, and in my opinion, moving and uplifting epilogue — not only stayed together, but flourished. So who are Barb, Nicki, and Margene without Bill? They are themselves — only better. Barb, who was revealed to Bill in his dying moments as a priesthood holder (or perhaps even the next Prophet?), has joined Bill's church and recently gave a blessing to Bill's first grandchild. Margene is living her dream to serve others on another international volunteer mission, while Nicki remains the family's snippy but loving superego. (And clearly she's patched things up with her daughter Cara Lynn, who appears briefly in the final scene, with her luxurious blonde locks at long last freed from their oppressive braid.)

That said, was it too much for the writers to kill Bill? Star Bill Paxton, the man behind Big Love‘s polygamist protagonist, says in the making-of featurette below that at first he "had a hard time reconciling myself with" the shooting, especially in light of all that Bill and his family have gone through over the past five seasons. But as a fan of the show since day one, I think the writers pulled off an incredible feat by staging a finale that at once shocked viewers while also acknowledging what we've known all along: This show wasn't about Bill Henrickson, it was about his wives. And in the end, those three women found themselves and the meaning of family all on their own — no husband needed.

Am I alone in loving it?