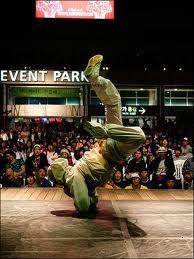 Prior to the 1980s, hip hop music was largely confined within the context of the United States. However, during the 1980s, it began its spread and became a part of the music scene in dozens of countries. In the early part of the decade, B-boying became the first aspect of hip hop culture to reach Germany, Japan, Australia and South Africa, where the crew Black Noise established the practice before beginning to rap later in the decade. Musician and presenter Sidney became France's first black TV presenter with his show H.I.P. H.O.P. which screened on TF1 during 1984, a first for the genre worldwide. Radio Nova helped launch other French stars including Dee Nasty whose 1984 album Paname City Rappin' along with compilations Rapattitude 1 and 2 contributed to a general awareness of Hip Hop in France.

Hip hop has always kept a very close relationship with the Latino community in New York. DJ Disco Wiz and the Rock Steady Crew were among early innovators from Puerto Rico. combining English and Spanish in the lyrics. The Mean Machine recorded their first song under the label "Disco Dreams" in 1981, while Kid Frost from Los Angeles began his career in 1982.

Cypress Hill was formed in 1988 in the suburb of South Gate outside Los Angeles when Senen Reyes (born in Havana) and his younger brother Ulpiano Sergio (Mellow Man Ace) moved from Cuba to South Gate with his family in 1971. They teamed up with DVX from Queens (New York), Lawrence Muggerud (DJ Muggs) and Louis Freese (B-Real), a Mexican/Cuban-American native of Los Angeles. After the departure of "Ace" to begin his solo career the group adopted the name of Cypress Hill named after a street running through a neighborhood nearby in South Los Angeles.

Japanese hip hop is said to have begun when Hiroshi Fujiwara returned to Japan and started playing Hip-Hop records in the early 1980s. Japanese hip hop generally tends to be most directly influenced by old school hip hop, taking from the era's catchy beats, dance culture, and overall fun and carefree nature and incorporating it into their music. As a result, hip hop stands as one of the most commercially viable mainstream music genres in Japan, and the line between it and pop music is frequently blurred.