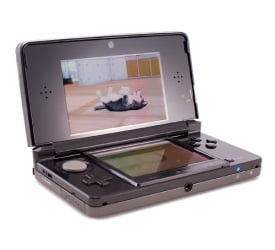 Nintendo has a long history as the reigning king of portable gaming. First there was the wildly popular Game Boy brand, including Game Boy Pocket, Game Boy Color, and Game Boy Advance. Game Boy was eventually replaced by the Nintendo DS, which has been the most popular handheld video game system in history, selling more than 144 million units in seven years. Now, the Nintendo DS is being replaced by the 3DS, a more sophisticated system that can play DS games in, you guessed it, 3D. The 3DS features a three-dimensional display, letting you enjoy portable video games with visual depth, without having to wear 3D glasses. At $249.99 (list), it's the most expensive Nintendo portable game system, and with a 3D-screen technology that's never been used in consumer products to date, it's a very big risk for Nintendo.

The 3D poses another potential problem for Nintendo: bad memories. While it's produced the most popular portable video game systems in the world, it also produced a massive flop: the Virtual Boy. In 1995, the company released its first 3D gaming system, an unwieldy set of tripod-mounted goggles that offered stereoscopic 3D in a harsh red and black display. It became infamous for giving gamers headaches after playing for only a few minutes at a time, and was a commercial and critical failure. Ever since Nintendo announced the 3DS, gamers have been worried that it would be a rehash of the Virtual Boy's failings, and turn out to be an unusable wreck of a system. Fortunately, that's not the case here, and the 3DS instead stands out as a very well-executed handheld gaming system with a surprisingly compelling 3D display—it's an easy Editors' Choice for portable gaming systems.

Design
At first glance, the 3DS is nearly identical to the DS Lite and DSi ($149.99, 3.5 stars). It's the same smooth, plastic, clamshell rectangle with dual screens, a direction pad, and various control buttons. It's the small details that matter, and when you start counting them the 3DS quickly becomes a completely different beast.

The most notable physical differences on the 3DS are the analog control pad, the larger, upper 3D screen, and the two-lens 3D camera. From a pure gameplay perspective, the analog pad is the best addition to the 3DS. It's a concave rubber circle that can slide around in a circular area, like the PSP's analog pad. But it's much more comfortable than the PSP's pad, sitting naturally under your thumb and offering just the right combination of firmness and springiness.