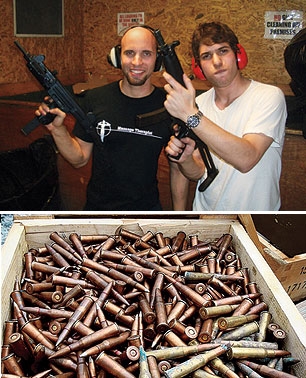 The e-mail confirmed it: everything was finally back on schedule after weeks of maddening, inexplicable delay. A 747 cargo plane had just lifted off from an airport in Hungary and was banking over the Black Sea toward Kyrgyzstan, some 3,000 miles to the east. After stopping to refuel there, the flight would carry on to Kabul, the capital of Afghanistan. Aboard the plane were 80 pallets loaded with nearly 5 million rounds of ammunition for AK-47s, the Soviet-era assault rifle favored by the Afghan National Army.

Reading the e-mail back in Miami Beach, David Packouz breathed a sigh of relief. The shipment was part of a $300 million contract that Packouz and his partner, Efraim Diveroli, had won from the Pentagon to arm America's allies in Afghanistan. It was May 2007, and the war was going badly. After six years of fighting, Al Qaeda remained a menace, the Taliban were resurgent, and NATO casualties were rising sharply. For the Bush administration, the ammunition was part of a desperate, last-ditch push to turn the war around before the U.S. presidential election the following year. To Packouz and Diveroli, the shipment was part of a major arms deal that promised to make them seriously rich.