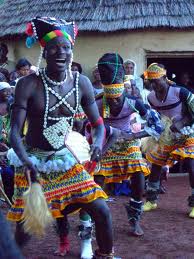 The roots of hip hop are found in African-American music and ultimately African music. The griots of West Africa are a group of traveling singers and poets who are part of an oral tradition dating back hundreds of years. Their vocal style is similar to that of rappers.[7] The African-American traditions of signifyin', the dozens, and jazz poetry are all descended from the griots. In addition, musical 'comedy' acts such as Rudy Ray Moore and Blowfly are considered by some to be the forefathers of rap.

Within New York City, griot-like performances of spoken-word poetry and music by artists such as The Last Poets, Gil Scott-Heron[8] and Jalal Mansur Nuriddin had a significant impact on the post-civil rights era culture of the 1960s and 1970s.

Hip hop arose during the 1970s when block parties became increasingly popular in New York City, particularly in the Bronx, where African American and Puerto Rican influences combined.[9][10] Block parties incorporated DJs who played popular genres of music, especially funk and soul music. Due to the positive reception, DJs began isolating the percussion breaks of popular songs. This technique was then common in Jamaican dub music[11][12] and had spread to New York City via the substantial Jamaican immigrant community. One of the first DJs in New York to use dub style mixing was the Jamaican-born DJ Kool Herc, who emigrated to the United States in 1967. Dub music had become popular in Jamaica due to the influence of American sailors and rhythm & blues. Large sound systems were set up to accommodate poor Jamaicans who couldn't afford to buy records and dub developed at the sound systems. Because the New York audience did not particularly like dub or reggae, Herc switched to using funk, soul and disco records. As the percussive breaks were generally short, Herc and other DJs began extending them using an audio mixer and two records.

Turntablist techniques, such as scratching (seemingly invented by Grand Wizzard Theodore[13][14]), beat mixing/matching, and beat juggling eventually developed along with the breaks, creating a base that could be rapped over. These same techniques contributed to the popularization of remixes as the looping, sampling and remixing of another's music, often without the original artist's knowledge or consent, can be seen as an evolution of Jamaican dub music,[11][12] and would become a hallmark of the hip hop style.

1520 Sedgwick Avenue, the Bronx, a venue used by Kool Herc that is often considered the birthplace of hip hop

Jamaican immigrants also provided an influence on the vocal style of rapping by delivering simple raps at their parties, inspired by the Jamaican tradition of toasting.[11][15] DJs and MCs would often add call and response chants, often consisting of a basic chorus, to allow the performer to gather his thoughts (e.g. "one, two, three, y'all, to the beat").

Later, the MCs grew more varied in their vocal and rhythmic delivery, incorporating brief rhymes, often with a sexual or scatological theme, in an effort to differentiate themselves and to entertain the audience. These early raps incorporated the dozens, a product of African American culture. Kool Herc & the Herculoids were the first hip hop group to gain recognition in New York[citation needed], but the number of MC teams increased over time.

Often these were collaborations between former gangs, such as Afrikaa Bambaataa's Universal Zulu Nation - now an international organization. Melle Mel, a rapper with The Furious Five is often credited with being the first rap lyricist to call himself an "MC."[16] During the early 1970s B-boying arose during block parties, as b-boys and b-girls got in front of the audience to dance in a distinctive and frenetic style. The style was documented for release to a world wide audience for the first time in documentaries and movies such as Style Wars, Wild Style, and Beat Street. The term "B-boy" was coined by DJ Kool Herc to describe the people who would wait for the break section of the song, getting in front of the audience to dance in a distinctive, frenetic style.[17]

Although there were many early MCs that recorded solo projects of note, such as DJ Hollywood, Kurtis Blow and Spoonie Gee, the frequency of solo artists didn't increase until later with the rise of soloists with stage presence and drama, such as LL Cool J. Most early hip hop was dominated by groups where collaboration between the members was integral to the show.[18] An example would be the early hip hop group Funky Four Plus One, who performed in such a manner on Saturday Night Live in 1981.[19]

Hip hop music was an outlet and a "voice" for the disenfranchised youth of low-economic areas[20] as the culture reflected the social, economic and political realities of their lives.[