FRANKLYWNOW - U.S. Census Is All About Hispanic

U.S. Census Is All About Hispanic 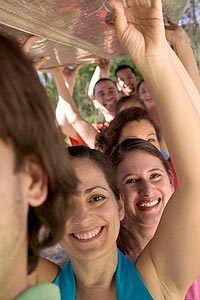 This is a very big year for the Census and not just for the obvious reason that new national Census numbers are forthcoming. The new data, which will be trickling out in coming days, reveal some profound shifts in demographic trends that will have major implications for marketers: You had better start thinking local.

It might help marketers that for the very first time, the Census will be putting out annual small-area data. The yearly data will look at occupational distribution, educational attainment, commuting patterns, housing, and socioeconomic status, according to Robert Groves, director of the U.S. Census Bureau.

"This has never happened before," noted Groves. "In prior years, we offered a big dose of data every 10 years, which became less and less valuable as the years passed." He said the new product, The American Community Survey, is based on ongoing polling of three million households.

He says this local data, free to advertisers, will be a valuable tool for targeted marketing. "If I were an advertiser, I'd study patterns in geographic areas and use those data to target messages and in-language media buys for areas with large non-English speaking populations."

Another growing sub-population with profound marketing implications are people with a multi-racial self-identity, according to Groves. "This is still single-digit but it is growing 30% to 50% state by state," he said. "This is critical because many of these people have feet in two cultures, so they should be great for translating across cultures, which is great for the advertising industry."

According to Groves, the 2010 data were garnered with help from a $300 - 400 million ad spend, in part to get younger Americans to participate in the Census. "It was a gigantic coalition of agencies and federal folks -- and we did tweeting, believe it or not," he said. "Our challenge was to have a presence on every platform, and we also hired some 600,000 people to canvas."

He said the big picture from new Census data is that population is at a 9.7% growth rate, its slowest growth since the Great Depression. The other big finding is the growth of the Hispanic population and its migration from cities to towns and suburbs. "This is the big headline of the Census, in both size and scope: the Hispanic population has dispersed throughout the country. Second, we are starting to a see growth in suburban areas of minority populations. Finally, the continuation of a huge demographic pattern, the gradual movement from Northeast and Midwest to the South and West."

Another shocker was that all metrics suggested that 18- to-24-year-olds were not getting the message about the importance of the Census. "They didn't know what the Census was about. So we mounted focus groups in real-time, and talked to them. They would say things like, 'Isn't this for my parents?'" said Groves, adding that the Census dumped "a ton of digital media" to reach them. One such effort was a contest among campus student associations to come up with Census ads and tag lines: "Easier than your girlfriend, faster than your boyfriend, Census 2010," was one.

Groves tells Marketing Daily that from a national basis, advertising must begin to reflect the realities of the U.S. population. "One of the issues that arises is the question about whether national advertising is dead in some sense. In the 2010 Census we had six different languages in our questionnaire and we advertised in 28 languages. So language is an issue with regard to reaching out to target markets. The first question is: how do they get to those diverse markets effectively?"

He said that while in-language media -- from biweekly community publications to cable networks and digital media -- are abundant, having granular demographic data on communities is critical. "When one is looking at local market ads, having fresh, timely data is now a necessary step," he said.

As far as national marketing messages, Groves said the growth of a multicultural population means that targeting nationally for single cultures using a single message will become less and less effective. "We need to know how race and ethnic groups are blending with others to effectively target messages with both cultures in mind."