FRANKLYWNOW - What's next for the healthcare law?

What's next for the healthcare law? 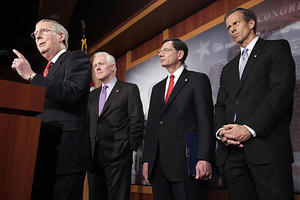 One year ago, President Barack Obama signed into law a sweeping healthcare overhaul to fulfill a long-standing Democratic pledge to ensure healthcare coverage for all Americans.

Passage of the law was a major legislative victory for Obama and helped change the political landscape, but not always in the way Democrats had hoped. Republicans strongly opposed the law and successfully worked public skepticism about it into sweeping election victories in November.

Here's a look at the uncertain future of the reform law.

Republicans, who say the law gives the federal government too much control and does little to reduce costs, have pushed a repeal bill through the U.S. House of Representatives after they took control in January. Full repeal, however, is unlikely unless Republicans successfully take control of the Senate and the White House in next year's presidential elections.

The Democratic-led Senate will not go along with repeal and Obama would veto any such bill. Democrats argue the law's reforms will slow the growth of healthcare costs while improving care and reducing the ranks of the uninsured.

A Republican move to withhold funds to stop implementation of the law will meet similar resistance from Senate Democrats.

That leaves Republicans the option of picking apart the law regulation by regulation. This strategy could be more successful.

Already, a revenue raising provision requiring businesses to file Internal Revenue Service forms on purchases and service totaling more than $600 a year is likely to be repealed with support from both parties.

The bill passed the House, and the Senate is expected to follow. The bill adjusts insurance purchase subsidies for middle income people as a way to cover the $22 billion cost of rescinding the so-called 1099 reporting provision.