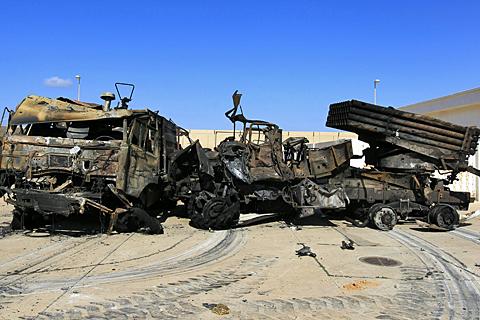 Forces loyal to Libyan leader Moammar Gadhafi are pounding targets near Tripoli, as NATO moves to assume responsibility for the "no-fly" zone over the country.

Pro-Gadhafi forces have continued their assaults on the rebel-held eastern cities of Misrata and Zintan. Also, explosions and anti-aircraft fire were heard in Tripoli on Wednesday.

As the fighting continues, the Associated Press says NATO warships off Libya's coast have begun enforcing a U.N. arms embargo. Meanwhile, diplomats say preparations are underway for NATO to take a key role in enforcing flight restrictions over Libya.

The news comes just hours after Gadhafi vowed to emerge victorious in the fight against rebels and international forces.

In his first public appearance in a week, Gadhafi told supporters at his compound in Tripoli that the country is ready for battle, whether it be long or short.

Libyan state television broadcast what it said was live video of Gadhafi speaking to the crowd. He denounced the international military attacks on his forces, calling the effort to enforce a no-fly zone over the country a crusade against Islam.