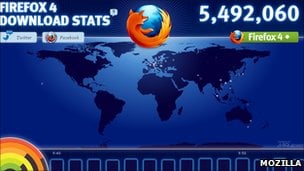 Mozilla's new Firefox 4 browser has managed more than 6 million downloads despite being available for less than a day.

The browser beat Internet Explorer 9's launch tally by more than double but has yet to catch up with Firefox 3, which was downloaded more than 8 million times on its first day.

Microsoft's new Internet Explorer 9 saw a return to form for the companies' web browser which for many years has received poor reviews from the tech community. Firefox 4, however, appears to have set the bar even higher, bringing in faster page loading and improved privacy and security. The browser also includes WebM video and WebGL 3D graphics and, unlike Internet Explorer 9,it is compatible with Windows XP. The new WebGL 3D will allow developers to bring more complex gaming and visualizations to the web, all of which will run within the browser.

Those who currently use Firefox can upgrade to the new browser by clicking on the help menu and selecting check for updates. Firefox 4 is available for Windows, Mac and Linux.

Firefox was created by Mozilla as an open source software project and is shared and downloaded for free. Famed for its speedy web page loading and security, Firefox quickly became one of the most popular browsers available. The browser became the most used back in 2009 when it overtook Internet Explorer.