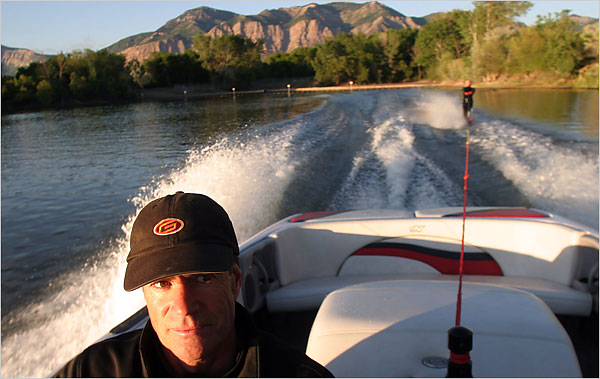 Outdoors Is the Way Up in Ogden, Utah

WEDGED between old stockyards and a boarded-up packing plant on the western edge of town, the kayak park is not easy to find. But it is just the kind of thing that draws outdoor enthusiasts to Ogden, Utah.

Of the 15 paddlers gathered at the park, on the Ogden River, one Saturday this spring, nearly half were from Salt Lake City, 35 miles away, while one man drove 90 miles from Provo for the day.

"Ogden is rocking right now," said Craig Haaser, 44, a potter born and raised in Ogden who was among the paddlers at the park that day.

Set in the western foothills of the Wasatch Mountains, Ogden, a city of approximately 83,000 people, is fast gaining on places like Boulder, Colo., as a destination for extreme sports.

Miles of mountain biking wind through the Wasatch-Cache National Forest within minutes of downtown, and the Ogden and Weber Rivers provide ample opportunity for in-town kayaking and canoeing. In addition, Snowbasin Resort, the site for the 2002 Olympic downhill and super G ski events, is less than 20 miles up Ogden Canyon.

Among several new developments in town is the 125,000-square-foot Salomon Recreation Center that will include a climbing wall, a surf rider pool, a bowling alley, a dance studio, a wind tunnel and a Gold's Gym. The center, which is to open this summer, is part of a multimillion-dollar entertainment and residential complex called the Junction that will occupy 20 formerly decrepit acres downtown.

While the 2002 Olympics helped raise Ogden's profile, it is the efforts of city officials, outdoor-company executives and real estate developers that are transforming the town, a former railroad hub.

The city is poised to be "the high adventure Mecca of the country," said Mayor Matthew Godfrey, 36, over a chopped salad at Rooster's Brewing Company on Historic 25th Street.

The mayor, who took office in 2000, says he sees outdoor recreation as a means to a vibrant and financially sound community.

"We need more high-paying jobs," he said. "We need tourism. We need a 20-to-40-year-old demographic that likes to work hard and play hard."

To achieve that, he is recruiting recreation companies to move to town. One such company is Goode Ski Technologies, a manufacturer of carbon fiber water and snow skis and ski poles, formerly based in Waterford, Mich.

"The mayor rolled out the red carpet for me, literally," recalled David Goode, the president and founder who relocated his 35-employee company to Ogden in August 2005.

Other ski companies, like Scott USA and Rossignol, have established small operations downtown or in Business Depot Ogden, an industrial park north of downtown. This fall, Amer Sports, the maker of Salomon and Atomic skis, expects to move its headquarters into the former American Can Building at 20th and Grant Streets that it is currently renovating.

Though Ogden is emerging as a snow sports hub, many other sports lure visitors to town. With a $1.5 million investment from Goode Ski Technologies, the city is also building a 70-acre water ski park on an existing lake that will include a half-mile-long slalom course, a 17-acre fishing lake and an 18,000-seat amphitheater for plays and concerts, a complex that Mr. Goode hopes will help to bring the water ski championship to Ogden in 2011.

Ogden already is host of a spring marathon and the Xterra Mountain Championship, an off-road triathlon with mountain biking and trail running events. It is also on the brink of being a notable climbing destination.

TWO years ago, Jeff Lowe, 56, a former world-class mountaineer who sits on a mayoral sports advisory committee, established Ogden Climbing Parks, a nonprofit organization to "make Ogden attractive to climbers," he said. Mr. Lowe, who moved back to Ogden after 30 years in Boulder, established a series of climbing routes using bolted ladder rungs, called a via ferrata, on private land in Waterfall Canyon last year. His current project is a tower of ice - suspended from steel cables - to be used for ice climbing. He plans to build it next winter in Ogden.