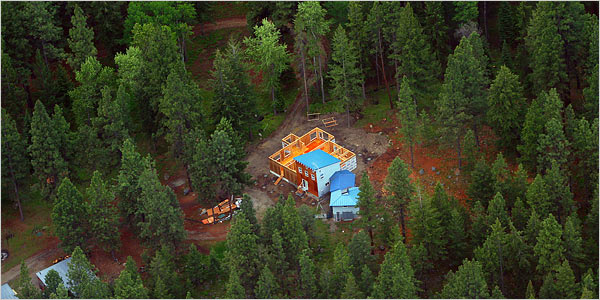 On Fringe of Forests, Homes and Fires Meet

COLEVILLE, Calif. - Lori and Don Morris had just started unpacking the boxes this month in their new dream house - four acres, national forest view, wide open land at their doorstep - when a wildfire raced down the stark bluffs over this high-desert town near the Nevada border.

More than 300 federal firefighters from as far away as Montana arrived, battling heat, 60-mile-an-hour wind gusts and flames bolting through 1,100 acres of bone-dry sagebrush and juniper. The Morrises, along with 200 other residents, watched helplessly as, miraculously, their homes were spared.

"Both of us were aware that these things happen," said Ms. Morris, 47, as she looked out the window to the charred hillside. "We just didn't think it would happen this fast."

A new generation of Americans like the Morrises, in moving to places perched on the edge of vast, undeveloped government lands in the West, are living out a dangerous experiment, many of them ignorant of the risk.

Their migration - more than 8.6 million new homes in the West within 30 miles of a national forest since 1982, according to research at the University of Wisconsin - has coincided with profound environmental changes that have worsened the fire hazard, including years of drought, record-setting heat and forest management policies that have allowed brush and dead trees to build up.