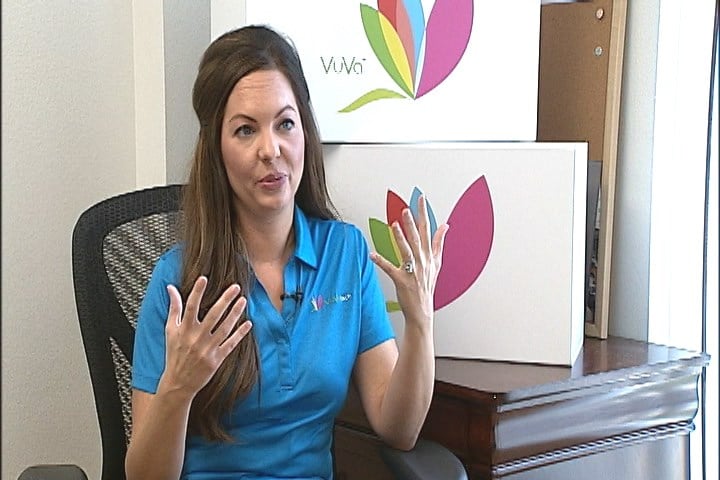 “..with many failed treatments for my painful intercourse issue,” Langdale said.

“I saw that Vulvodynia was the name of a condition that affects 1 in 6 women that causes painful intercourse,” Langdale said. “It’s kind of like Fibromyalgia; they don’t know what causes it.”

Then she thought of her mom, who used magnetic therapy on her Fibromyalgia decades ago.

The dilators aren’t FDA approved, but Langdale says after getting amazing results herself, she did a clinical trial at Sarasota Memorial Hospital.

“It helped those women; it was 80% more effective than the dilators without neodymium magnets,” Langdale said. “So that’s how VuVaTech was created.”

The pink dilators, which Langdale created with a pelvic pain doctor, come in different sizes, tailored to each woman’s body and level of pain.

Dr. Michael Swor, OB/GYN, says these are just a few examples of what causes sexual pain.

“There’s muscular pain, where they have muscle spasms, and the dilators help relax or reduce the spasm to the muscles,” Swor said.

He says the magnetic dilators, which many of his patients have used, gently stretch the painful tissues.

“I’ve seen no adverse events, no negative reactions,” Swor, who was the principal investigator in the clinical trial, said.

He says the dilators won’t necessarily help all kinds of pelvic pain, but for Langdale, the proof is in the testimonials.

“To get an email from someone saying you helped expand their family, they’ve become pregnant because of VuVa when they thought they’d never have intercourse again, or have children,” Langdale says, “it brings tears to my eyes.”

To learn more about her products visit vuvatech.com.