Kids get hands-on look at robotic surgery at Doctors Hospital 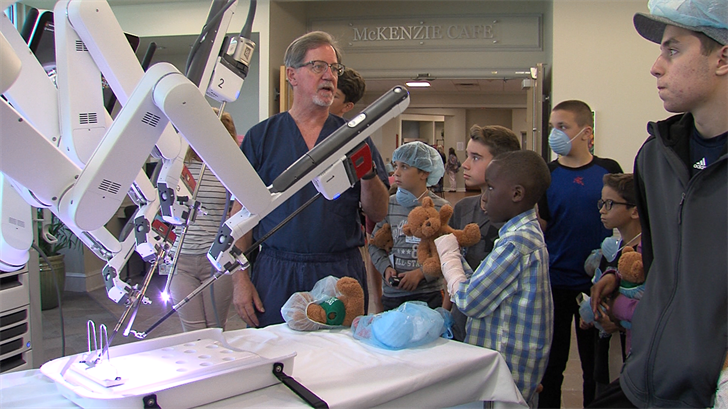 SARASOTA- It’s no secret kids can’t wait to get their hands on the latest technology, and Doctors Hospital is hoping it’s technology inspires kids to get off their phones and spend a little bit more time with their books.

By letting them test out a different kind of operation game at Doctors Hospital.

“You could move around objects,” Michael Thele said. “Like pennies and rubber bands, and you could do anything except break it.”

On National Take Your Child to Work Day, Doctor’s Hospital gave kids the chance to test out the latest in medical tech, the DaVinci Robotic Surgery System.

“This is a generation that is really tech savvy,” Dr. Bryan Smith said. “They play video games they work with their phones all the time, so this is something that really plays to their strengths, and we saw kids pick this up very quickly, faster than I did.”

Michael is in the third grade and loves video games.

“Star Wars Battlefront 2 and minecraft” Michael Tehle said. “I like the robot better.”

Going to work with his dad helped Dr. Bryan Smith realize he wanted to become a surgeon, just like his father.

“Filling sterile saline bottles at the Mobile General Hospital when I was 14,” Dr. Smith said. “And then I did various jobs, volunteer activities, I served as an orderly in the hospital room, I swung a mop.”

He’s looking to pass that on to the next generation.

“The surgeon was saying about how he had done like 14 years of school,” Kaylene Balzer said. “And that like really inspires me that people can go out there and do it, and work with stuff that’s as cool as this.”

Dr. Smith says doing something as simple as flipping a penny can make kids want to do more.

“It’s awesome that I’m using something that can save people’s lives,” Thele said. “And it’s much better than a video game, much better.”