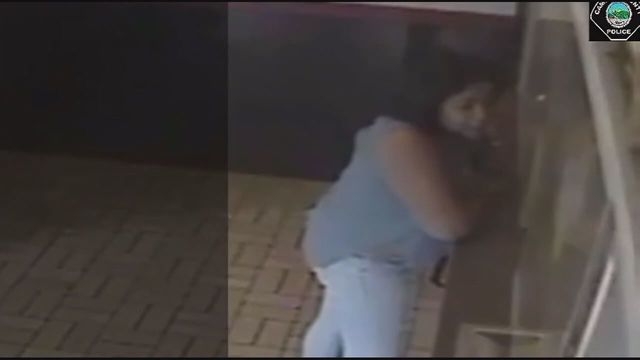 Police say a woman who used a child to help her steal from a Camden restaurant has been taken into custody.

The owners of a Camden store say a woman ordered two shrimp bowls at New Hong Kong restaurant then left while her order was being prepared. Meanwhile, Fang Guan went to another room in the back of the store with her family.

"My mom thinks something was suspicious so there's like a problem so she checked the camera," said 11-year-old Jenny Guan. She says her mother noticed a bag of money they kept behind the enclosed counter missing and the woman hadn't come back to pick up her order.

Watch surveillance video show the woman come back in the store with a child and while no one is behind the counter police say she tells the little boy to crawl through the opening of the glass window and get the money. The video shows his arm sticking out as he goes in.

"She sat the baby on a counter then the baby crawled through. He hopped down and got the money. Went outside to check what's in the bag and after she checked all the money and then the family just left," said Jenny. Police have concealed the child's face in the video. He's so young he likely doesn't understand what he's doing.

"He looks about 5 years 5 or 6 years old, "said Fang Guan. The Guan's say nothing like this has ever happened. They've never been robbed in the six years they've been here on Chase Street in Camden. It makes them uneasy.

"We're very upset. We're also like scared that if this happen again it's going to be very dangerous for us," said Jenny.

Police have not said how the woman and child might be related, but FOX 29's Shawnette Wilson reports the woman was taken into custody Tuesday night.