FRANKLYWNOW - Fairview resident on Gambell Street: ‘This road is dangerous’

Fairview resident on Gambell Street: ‘This road is dangerous’ 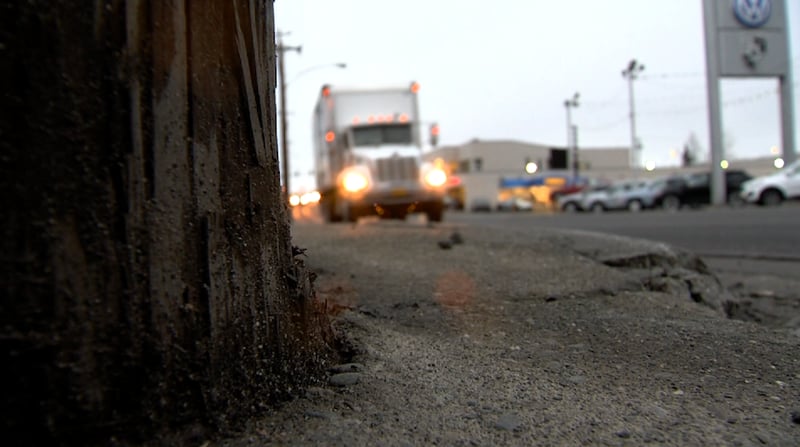 Christopher Constant, Fairview Community Council president, says “safety first” is a somewhat foreign concept when it comes to the stretch of Gambell Street in his neighborhood.

The Oct. 2 death of a pedestrian in Fairview sparked the continuation of a years-long conversation among neighbors. One resident plainly stated on social media — “Something has to happen with this stretch of road.”

In a neighborhood where Constant says most residents walk or take the bus, utility poles take up the majority of the sidewalk in some areas.

“You basically have shoulder-to-shoulder width to pass,” said Constant, standing on a section of the sidewalk where two poles together only leave inches on the sidewalk. “We have no snow right now, so we have as best access as we’re going to get all year long, and I can barely walk through here.”

The Anchorage Planning and Zoning Commission passed a resolution last year recommending approval of the Fairview Neighborhood Plan. Further approved by the Anchorage Assembly in September 2014, the plan called for drastic changes to the Gambell strip.

“The project intended to widen the sidewalks, narrow the road by one lane — but widen the lanes to make them safer,” explained Constant.

He says now it’s up to AMATS, Anchorage Metropolitan Area Transportation Solutions, to figure out how the muni and state can come together to put the plan to action.

Gambell Street did see a facelift this summer; The Department of Transportation and Public Facilities re-paved the streets and installed ADA-compliant curb ramps on the strip. Constant and other neighbors hoped DOT’s project would extend to the sidewalks, but they remain untouched.

Shannon McCarthy with DOT says the department is aware of the safety concern regarding the sidewalks that line Gambell Street. To bring the sidewalks up to the most current ADA standards, 48 inches of sidewalk are required, with 60 inches in some cases to ensure wheelchairs can turn around, according to DOT’s new ADA transition plan.

The state has plans to upgrade the sidewalks, but McCarthy says it will take time and tens of millions of dollars.

“We do want to do more on that road eventually,” said McCarthy. “Of course, burying utilities takes right of way, so we’d be impacting all the businesses and property owners along that corridor, so it takes time.”

But Constant says waiting will only increase the safety concern, especially with winter weather conditions approaching. He adds it’s not uncommon to see wheelchairs traveling down Gambell “because they can’t make it on the sidewalk.” Fairview is also home to Access Alaska, which provides services to those living with a disability. Constant says the limited accessibility is a barrier for them to get to the resources they need.

“Just imagine this if there was a bank of snow here,” he pointed out. “Then the sidewalks are absolutely useless.”

Constant’s hope is that the municipality steps in — as Mayor Ethan Berkowitz has said his goal for Anchorage “is to make sure it’s accessible to everybody.”

“We have a new mayor,” said Constant. “We have new leadership that’s committed to doing projects that will make a difference.”

While neighbors wait for safety improvements in the heart of Fairview, the recent fatal crash and many close calls they’ve seen are fresh on their minds.

The post Fairview resident on Gambell Street: ‘This road is dangerous’ appeared first on KTVA 11.