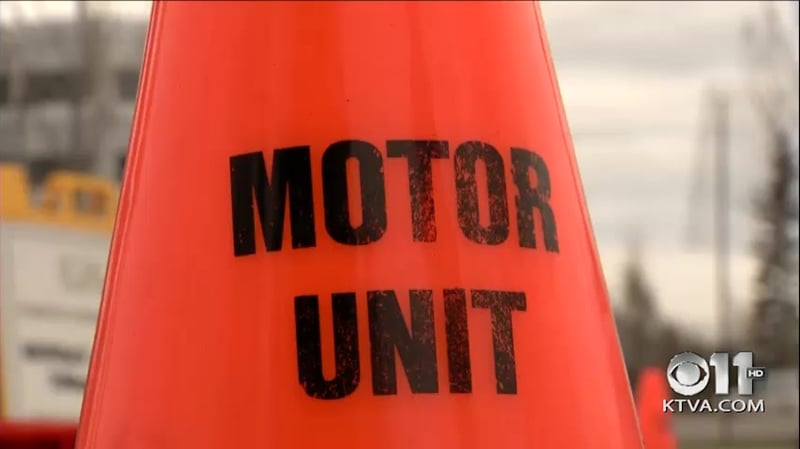 Twenty people have died in collisions on Anchorage roads so far in 2015. Determining what went wrong in each of those crashes is the purpose of the Major Collision Investigation Unit, consisting mostly of officers and investigators from the Anchorage Police Department’s traffic unit.

“It’s really important that we document everything as well as we possibly can,” said Sgt. Roy LeBlanc, head of the traffic unit.

LeBlanc led the MCIU through a training exercise on Wednesday afternoon. In one drill, they mapped out a mock accident scene using lasers and a data collector to record of the precise location of curbs and skid marks, and the location of a body — denoted in this instance by a set of orange cones.

That data collected could be used later to reconstruct the crash on a computer and even create a 3D animation of the collision.

“We’re trying to take our time and make sure that the roadway and the evidence in the roadway is documented as precisely as possible,” said Steve Dunn, one of the investigators on the team.

The MCIU only responds to collision scenes with serious injuries or a fatality.

“It’s the same thing as going to a shooting or a homicide. We collect all the evidence,” Dunn said.

Dunn has been with APD for 18 years. He said while crash investigations can cause aggravating traffic delays, they only have one chance to properly collect evidence and – hopefully – bring the proper party to justice.

“It’s rewarding to be able to go to the scene and figure out what happened … for the family, for the department and for the community,” Dunn said.