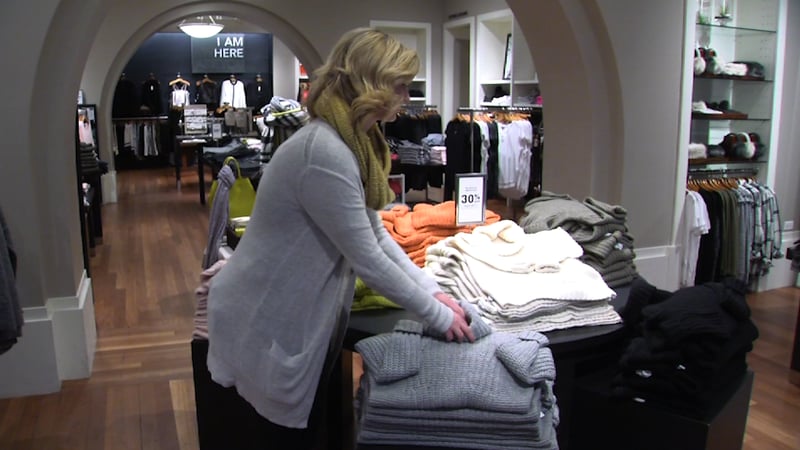 Emily Consalvi has only been working at the Pandora store in Anchorage 5th Avenue Mall for a few weeks, but she says she’s getting the hang of it.

“A lot of learning, a lot of just getting used to the products, working with the customers,” the 23-year-old explained. “Figuring out exactly where all the beads are, because there are over 700.”

As a sales associate, Consalvi says she’s “trying to make holiday shopping as stress-free as possible.” She’s taken to studying the hundreds of charms Pandora has available, so once the holiday rush begins, she’ll be prepared.

But more than that, Consalvi says she’s putting in the work to make the position more permanent.

“I’m looking to stay for after the holidays,” she said. “So, hopefully, I”ll be sticking around.”

Now Hiring for the Holidays! — it’s a sign posted in Pandora’s front window. And the jewelry chain isn’t the only store looking for more help with the expected retail rush. Across the mall, Banana Republic’s managers expect to add more bodies to their staff as well.

Katarina Butterfield is one of the retailer’s newest employees, but her manager says she stood out from other holiday hires he’s seen.

“They’re here to fill a temporary need; they need a little extra spending money for the holidays,” said John Dukewits, the merchandise presentation manager at Banana Republic. “But I’ve had people come in who really shine and sparkle.”

Butterfield, 20, had “a sort of spark in her eye,” Dukewits says. That spark turned her temporary position at the store into something she’ll be doing long after the last of the holiday exchanges.

“If you can, get in during the holiday season and just let them know that you really like it here and you’d like to stay,” Butterfield offered as advice to anyone hesitant about applying for a seasonal position. “Sometimes they do have availability where you can stay permanently, and that worked out for me.”

Signs that read “Now Hiring for the Holidays!” — like the one posted in the window at Pandora — are popping up all over Anchorage. Nationwide, retailers are expected to hire between 700,000 and 750,000 seasonal workers this holiday season, according to the National Retail Federation. Those numbers are in line with last year’s holiday positions, which means the doors are wide open for new hires.