FRANKLYWNOW - On Veterans Day, vets not united on fate of Valley Honor Wall

On Veterans Day, vets not united on fate of Valley Honor Wall 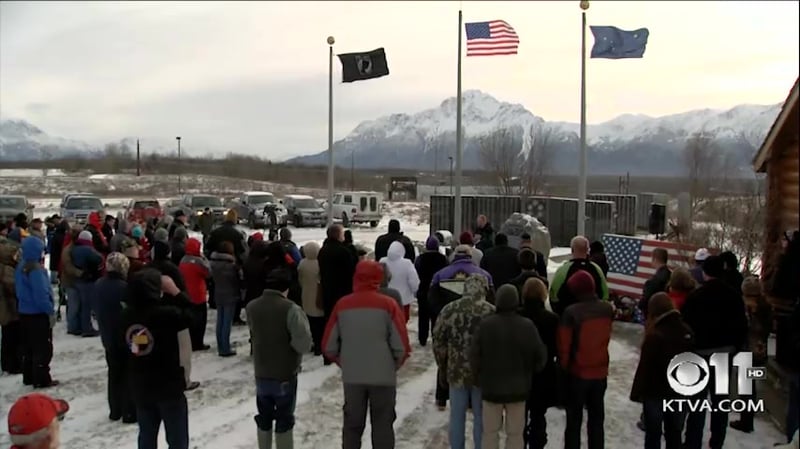 On Wednesday, like every other Veterans Day for more than 20 years, a crowd of around 100 people gathered at the Veteran’s Honor Wall in Wasilla. They held a ceremony, paying tribute to those who’ve served our country in the Armed Forces, but this year might be the last time the ceremony happens in that location.

The Honor Wall sits on a plot of land next to the Valley Visitor’s Center, and has done so since 1992. A developer bought the land to build a senior care facility, so the wall — which has more than 2,000 names carved on it — needs to move.

Some local residents, like Kevin Sweeney, don’t want that to happen. His father’s name, Joseph Sweeney, is on the wall. His father also laid the concrete on which the wall stands.

“When my dad did a lot of this concrete work around here and helped to fasten these panels up, the intention was that it would be permanent, right here,” Sweeney explained.

That’s why he says the wall needs to stay standing right where it is, so people can remember and honor those who’ve served.

Veteran Johnathon “JR” Hackett says it’s that remembrance, not the physical location of the wall, that matters most.

“This wall could be anywhere,” Hackett said. “It could be a veteran’s grave alongside a highway somewhere. Just pay tribute.”

The City of Wasilla has offered to give the wall a permanent home in the veteran’s garden downtown. Hackett says that permanence makes it a good option.

“The fact that this wall be taken care of into the future so that these people who are represented upon it are never forgotten,” he said.

But for Sweeney, the memories are tied into the land where the wall has always stood and that’s where he wants it to remain, unchanged, as the Valley grows.

“There’s some things that shouldn’t be moved and have to be — for lack of better terms — a victim of all this growth,” Sweeney said.

The developer of the senior care facility has said he wants to incorporate the wall into the design. He’s also said he will work with vets groups and John and Hazel Schwulst, who oversee the wall. The Schwulsts said that they’ll have final say on where the wall moves, once they’ve seen the developer’s plans.

The post On Veterans Day, vets not united on fate of Valley Honor Wall appeared first on KTVA 11.