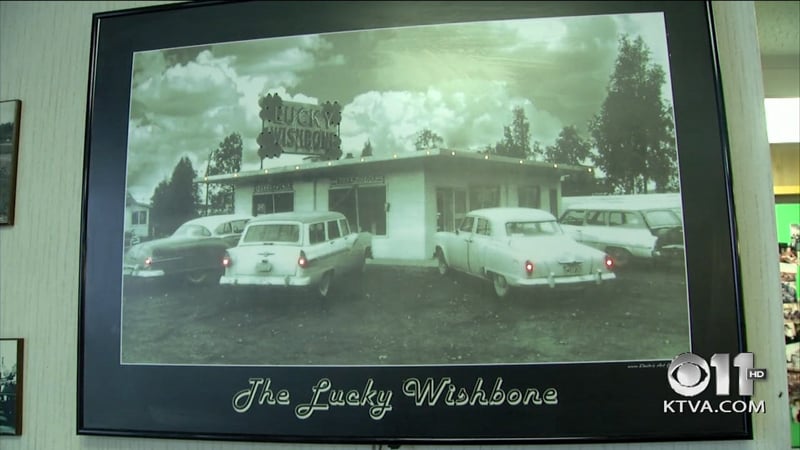 An Anchorage restaurant is getting set to celebrate a big anniversary. On Nov. 30, the Lucky Wishbone will be 60 years old.

Owner George Brown is 93 now. He remembers the day he and his wife, Peggy, opened the doors in 1955, and the journey that led them to Anchorage.

Brown is originally from Wisconsin. He was a pilot in World War II, assigned to shuttling airplanes between India and China. Brown was in Denver when he met young Peggy at a restaurant where she was waitressing. From there, he said, things happened quickly.

“We got hooked up pretty fast, we had to move quick because the war was on,” he recalled.

The couple had two young children by the time they hit the road for Anchorage in 1951. They opened the Wishbone four years later with a signature dish of fried chicken. George said they turned a profit the very first day.

Brown said the restaurant has had ups and downs over the years but he was proud of the fact that he always made payroll. And his was one of the first restaurants to ban smoking in Anchorage — that was in 1990. He said it brought grumbling from some customers but in the end it was worth it.

Through it all Peggy was at his side. The pair worked at the restaurant together for decades. Brown lost her a few years back and said it’s been hard, but the restaurant keeps him going. He comes to work nearly every day and considers his many long-time customers his friends and his employees just like family.

The restaurant is planning a special celebration on Nov. 30 to mark their 60th anniversary. They’ll be open the usual hours from 10 a.m. to 10 p.m.

At noon on that day Brown will also receive a special citation from the Alaska Senate, recognizing him for his many years of serving the Anchorage community.

The post Lucky Wishbone to celebrate 60 years in business appeared first on KTVA 11.