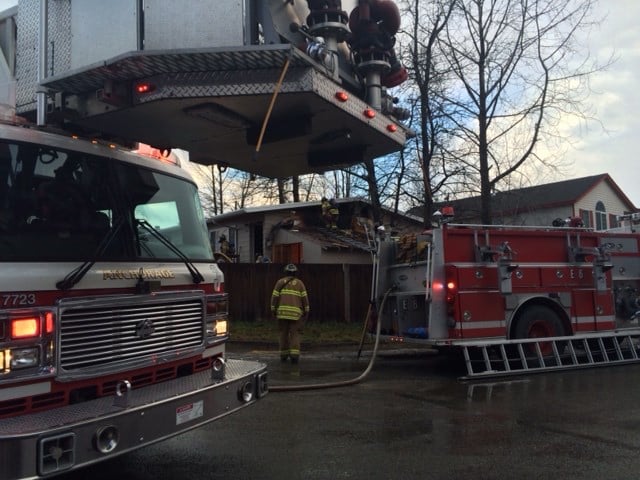 No injuries were reported after the Anchorage Fire Department responded to a fire at a triplex in East Anchorage Friday morning.

The only resident home at the time of the fire, Kami Clark, was able to escape unharmed with her toddler and feline companion.

“I was just watching TV and a cop knocked on my door and, [in] a blur of smoke, said, ‘Hey, you need to leave. The apartment next door is on fire,'” said Clark. “I just panicked and grabbed my cat and my kid and got out.”

The fire is still under investigation but is believed to have originated in a shed containing a furnace and water heater next to the building and worked its way into at least one of the units, according to Station 6 Fire Capt. Danny Costanios.

“A lot of times when fires start from the outside and go inside from the attic space it takes a while for the smoke detector to go off, because the fire is above them in an area where there is no smoke detector,” said Costanios.

The occupant of the apartment closest to the shed was not home at the time of the fire.

Costanios believes the fire was likely smoldering for quite some time before they were notified by a passerby.

The fire caused minor damage to at least one of the building’s apartment units, and crews will remain on scene to monitor the situation.

Costanios reminds residents to get their furnace or boiler inspected every year and to keep obstructions at least 36 inches away from heat sources.