Thousands turn out for 2015 Police Navidad 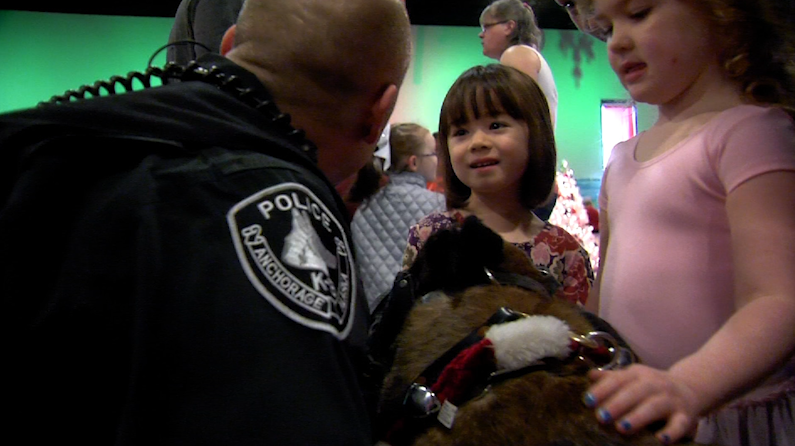 An estimated 6,000 people filled the Dena’ina Center Saturday for the fifth annual Police Navidad. The free festival is a chance for the Anchorage Police and Fire Departments to get to know their community in a “non-crisis” environment, says Dani Myren with the APD Employees Association.

About 200 people were volunteering Saturday, many of which were APD officers and firefighters.

“It’s so heartwarming to see all these folks,” said Myren, who spent the past few months organizing Police Navidad. “Of all the things they could be doing on a Saturday, they’re coming down here to help support this community event.”

Less than an hour into the event, the Dena’ina Center was filled with people. Kids were able to slide down a fire truck, try on police gear and engage in arts and crafts projects. One featured project allowed kids to write letters to Alaska-based troops stationed abroad in exchange for a hot chocolate.

“They’ve been jumping on the greeting card part before they even know about the hot cocoa,” said Buddy Whitt, executive director of the Armed Services YMCA of Alaska, host of the letter writing.

The letters will be sent all over the world, Whitt says. Most of them will go to service members in Kosovo, Djibouti and Kuwait.

“The response has been tremendous. Not only from out local community but also from our deployed service members. They just eat it up. They love it,” said Whitt.

“We’re glad to be a part of it,” said Missy Conley, Kya’s mother.

“Anybody can be your family,” said Missy. “It doesn’t just have to be by blood.”

The post Thousands turn out for 2015 Police Navidad appeared first on KTVA 11.